Number of cases of shigellosis by year, acquisition of diarrhea and Shigella species. *From September to December 2008. 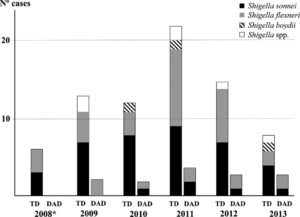 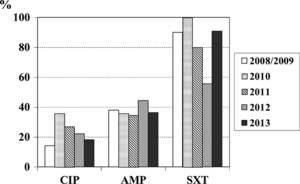 An increase of sexually transmitted shigellosis is currently being reported in developed countries. In addition, travel-related shigellosis can introduce resistant strains that could be disseminated within this new scenario. Epidemiological features and antimicrobial susceptibility of shigellosis depending on where infection was acquired were investigated. From 2008 to 2013, subjects with shigellosis were studied. Patients were classified according to acquisition of Shigella as traveler's diarrhea (TD) or domestically acquired diarrhea (DAD). Ninety cases of shigellosis were identified: 76 corresponding to the TD group and 14 to the DAD group. In the DAD group, most of patients were human immunodeficiency virus (HIV)-positive men who have sex with men (MSM), being shigellosis associated to male sex (P = 0.007) and HIV infection (P < 0.0001). S. sonnei (47.8%) and S. flexneri (42.2%) were the predominant species. The highest resistance was detected for trimethoprim/sulfamethoxazole (SXT) (81.8%), followed by ampicillin (AMP) (37.8%) and ciprofloxacin (CIP) (23.3%). Resistant Shigella strains were more frequent in subjects with TD than those with DAD, although only for CIP the difference was significant (P = 0.034). Continuous monitoring of patients with shigellosis is necessary to control the spread of resistant Shigella strains and for effective therapy. Men with shigellosis who have not traveled to an endemic area should be screened for HIV infection.