Unadjusted incidence of reported ciguatera in Florida by county of residence, 2007–2011. Incidence rates were calculated using the number of confirmed cases of ciguatera reported to the Florida Department of Health and population data from the 2010 U.S. Census.

Ciguatera cases and response rate of recreational fishing license holders by county of residence in e-mail survey. (A) Number of cases of ciguatera per 1,000 fishers contacted by e-mail and (B) percentage of e-mailed fishers that responded to the survey.

Catch locations of ciguatera illness-causing fish. Time frames for fish causing likely and possible cases are based on responses to e-mail survey of fishers (survey options: within the past year; more than 1 year, but less than 5 years ago; more than 5 years ago). Specific dates of illness/fish catch were not collected. 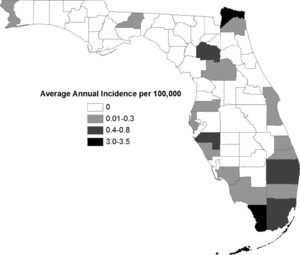 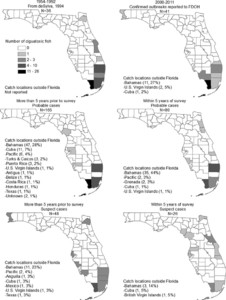 Epidemiology of Ciguatera in Florida

Ciguatera is the most commonly reported marine food-borne illness worldwide. Because there is a biological plausibility that ciguatera may be impacted by long-term climate variability and Florida is on the northern border of the geographic distribution of ciguatera, it is important to update our understanding of its epidemiology in Florida. We performed an analysis of 291 reports in Florida from 2000 to 2011 and an e-mail survey of 5,352 recreational fishers to estimate incidence and underreporting and identify high risk demographic groups, fish types, and catch locations. Incidence was 5.6 per 100,000 adjusted for underreporting. Hispanics had the highest incidence rate (relative risk [RR] = 3.4) and were more likely to eat barracuda than non-Hispanics. The most common catch locations for ciguatera-causing fish were the Bahamas and Florida Keys. Cases caused by fish from northern Florida were infrequent. These results indicate that ciguatera incidence is higher than estimated from public health reports alone. There is little evidence that incidence or geographic range has increased because of increased seawater temperatures since earlier studies.