“What would help your organization better protect your clients and colleagues from dengue? Please check all that apply.” 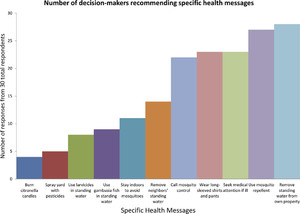 Dengue is the most prevalent mosquito-borne viral infection. Recent outbreaks in the southern United States illustrate the risk of reemergence. The first autochthonous cases since 1934 in Key West, FL, occurred in 2009–2010. We conducted a survey in 2012 with decision makers instrumental to the control of the outbreak to 1) determine their awareness of the multiple strategies used to control the outbreak and 2) assess their perceptions of the relative effectiveness of these strategies. An online survey was delivered to a predefined list of decision makers from multiple sectors to better understand dengue preparedness and response. Thirty-six out of 45 surveys were returned for an 80% response rate. Results indicate the need to focus prevention strategies on educational campaigns designed to increase population awareness of transmission risk. Respondents remain concerned about future dengue transmission risk in Key West and lack of resources to respond.