Map of Yunnan Province and neighboring countries. (A) (Jinghong City, Xishuangbanna, Yunnan Province, China) shows the location of dengue outbreak. (B) (Houayxay County, Bokeo Province, Laos) and (D) (Vientiane, Laos) show the locations of imported dengue cases. (B) and (C) (Luang Prabang County, Luang Prabang Province, Laos) show the locations of Laotian cases. Imported case refers to Chinese traveler, who felt ill in Laos, and then came back to China. Laotian case refers to Laotian, who was infected in Laos, and had never traveled abroad.

Phylogenetic analysis based on the full envelope protein sequences of dengue virus (DENV)-3 from autochthonous, imported, and Laotian patients. The phylogenetic tree was constructed using the maximum likelihood statistical method in the MEGA 5.0 program. Bootstrap values were obtained from 1,000 replicates. (A) Topological figure of integral phylogenetic tree based on 99 envelope gene sequences from different geographic regions available in GenBank database and 33 new sequences obtained in this study. (B) Clade of genotype II, which is magnified from “A,” including 32 new sequences. (C) Clade of genotype III, which is magnified from “A,” including another new sequence. Each DENV sequence is denoted by its GenBank accession number, country of origin, and year of isolation. Autochthonous, Laotian, and imported sequences obtained in this study are denoted by “▲”, “■”, and “●” respectively. 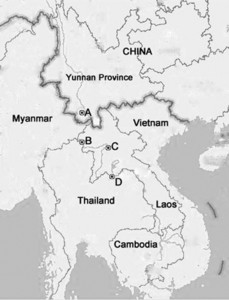 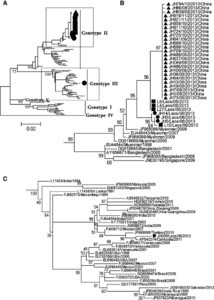 In August 2013, Xishuangbanna, Yunnan Province, China, had its first dengue outbreak. Dengue virus (DENV) RNA detection in sera or viral isolates revealed that all 222 autochthonous patients detected and three Chinese travelers from Laos (imported cases) were positive for DENV-3 serotype, while DENV-1 and DENV-4 were detected in travelers from Myanmar and Thailand during the outbreak. For 33 suspected dengue cases collected before the outbreak, two imported cases from Laos and nine residents living in Laos (Laotian cases) were positive for DENV-3. Further, a random subset of 33 positive cases for DENV-3 was sequenced for the full envelope gene of DENV. Phylogenetic analysis showed that all of the 25 autochthonous cases sequenced were grouped into the same clade, genotype II of DENV-3, with imported cases from Laos and Laotian cases. These results suggest that the genotype II of DENV-3 was associated with the outbreak and may have originated from the virus circulating in Laos.