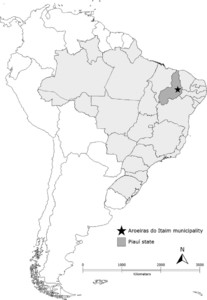 A Brazilian ranch worker with encephalitis and flaccid paralysis was evaluated in the regional Acute Encephalitis Syndromic Surveillance Program. This was the first Brazilian patient who met the Centers for Disease Control and Prevention (CDC) confirmation criteria for West Nile virus disease. Owing to the overlapping of neurological manifestations attributable to several viral infections of the central nervous system, this report exemplifies the importance of human acute encephalitis surveillance. The syndromic approach to human encephalitis cases may enable early detection of the introduction of unusual virus or endemic occurrence of potentially alarming diseases within a region.

The West Nile virus (WNV) disease is an arboviral disease with a large spatial distribution throughout the world. Following the route of its spread southward from the United States, evidence of WNV circulation among animals has been detected in the Cayman Islands (2001); El Salvador, Guatemala, and Belize (2003); Colombia and Venezuela (2004); Argentina (2005); and Brazil (2002–2013). However, viral isolation and human, equine, or avian morbidity were only sparsely recorded in Latin America and the Caribbean.1–3 The reasons for the discrepancy between the serologic evidence of widespread WNV circulation and the absence of significant human or animal morbidity in the Americas, except the United States and Canada, are still a subject of debate.1–4 Here we report the first documented case of West Nile encephalitis in Brazil.

A 52-year-old ranch worker was admitted to a hospital in Brazil with acute encephalitis and flaccid paralysis in August 2014. He was coming from rural area of Aroeiras do Itaim municipality, Piauí State, Brazil (Figure 1). The patient reported severe muscle weakness arisen 2 weeks before hospitalization, during an acute febrile illness. The fever was accompanied by chills, prostration, headache, neck pain, vomiting, diarrhea, and abdominal pain. He suffered tonic–clonic generalized seizure followed by drowsiness, transient obtundation, and confusional state.

At admission examination, the patient was aware, with bilateral facial palsy, dysarthria, nuchal rigidity, and Lasegue's sign. He had flaccid and symmetrical tetraparesis, and abolished myotatic reflexes. There were no sensorial deficits.

Electroneuromyographic study showed acute motor axonopathy. Brain and spinal cord magnetic resonance images were normal. During hospitalization, the patient developed respiratory distress and was transferred to intensive care unit. Empirical administration of ceftriaxone and human hyperimmune immunoglobulin were performed. The patient showed partial and progressive improvement; at discharge, he was not able to walk without assistance.

In 2003, the Pan American Health Organization issued a warning for WNF epidemics in South American countries.1 Serological evidences of viral circulation among horses and birds were found in the Pantanal and Amazon Brazilian regions between 2002 and 2013.2,4–7 Despite these results, to date no case of symptomatic WNV disease had been reported in any animal species or in humans in Brazil and very few SLEV encephalitis cases were recognized in Brazil.8

In December 2014, the WHO announced the confirmation of this first human case of West Nile virus (WNV) disease in Brazil, as described herein.9 This case had unclear characteristics. The disease did not occur within the context of notified equine or avian morbidity or an outbreak of human acute febrile illness or neuroinvasive syndrome. Also, the countryside of Piauí State is located far from the regions where equine seropositivity has been detected.2,4 However, a regional program of surveillance of human acute viral encephalitis had already begun when the patient was admitted. A protocol for investigation of encephalitis was applied, covering herpes virus, enteroviruses, and arboviruses.10

Despite the mandatory reporting of suspected cases of WNV disease in Brazil, it is possible that sporadic cases or small clusters of WNV disease had previously occurred in different regions of the country and remained undiagnosed because of 1) the lack of a syndromic sentinel surveillance system of viral encephalitis in humans in other regions, 2) the overlapping of the neurological symptoms attributable to several other viral infections of the central nervous system, and 3) the limitations in the availability of diagnostic resources in most Brazilian hospitals.2,4,11–13

Since the detection of this first human case of WNV encephalitis in Brazil, strategies for a prospective approach to new cases are being implemented. Preliminary serologic studies performed among chickens and equines on the patient's farm showed the presence of specific antibodies against WNV confirmed by PRNT90.14 Consequently, serological surveys in humans and animals from the surrounding region, surveillance of epizootics in birds and horses, as well as entomological surveillance are being conducted.

WNV isolation and RT-PCR detection were negative in this patient because he did not access the tertiary health service until after 2 weeks of disease onset. Through early evaluation of patients with acute febrile illness or severe neurologic manifestations and by animal surveillance, WNV direct detection may allow us to characterize the lineage introduced into Brazil and provide important insights about the ecoepidemiology of this arbovirus.

This report exemplifies the importance of acute viral encephalitis surveillance. The syndromic approach to human encephalitis cases may enable early detection of the introduction of exotic viruses or the endemic occurrence of potentially alarming diseases within a receptive region.