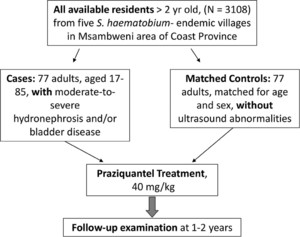 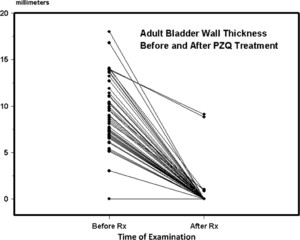 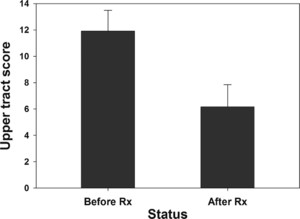 Previous population-based studies have examined treatment impact on Schistosoma-associated urinary tract disease among children, but much less is known about longer-term treatment benefits for affected adult populations in areas where risk of recurrent infection is high. In communities in Msambweni, along the Kenya coast, we identified, using a portable ultrasound, 77 adults (aged 17–85) with moderate-to-severe obstructive uropathy or bladder disease due to Schistosoma haematobium. Treatment response was assessed by repeat ultrasound 1–2 years after praziquantel (PZQ) therapy and compared with interval changes among age- and sex-matched infected/treated control subjects who did not have urinary tract abnormalities at the time of initial examination. Of the 77 affected adults, 62 (81%) had improvement in bladder and/or kidney scores after treatment, 14 (18%) had no change, and one (1.3%) had progression of disease. Of the 77 controls, 75 (97%) remained disease free by ultrasound, while two (3%) had apparent progression with abnormal findings on follow-up examination. We conclude that PZQ therapy for S. haematobium is effective in significantly reducing urinary tract morbidity from urogenital schistosomiasis among adult age groups, and affected adults stand to benefit from inclusion in mass treatment campaigns.