Geometric mean prevalence of Wuchereria bancrofti and microfilaremia prevalence by age over the six consecutive mass drug administration rounds in the study area. 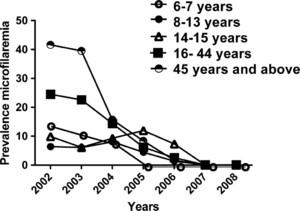 Wuchereria bancrofti prevalence and transmission were assessed in six endemic villages in Sikasso, Mali prior to and yearly during mass drug administration (MDA) with albendazole and ivermectin from 2002 to 2007. Microfilaremia was determined by calibrated thick smear of night blood in adult volunteers and circulating filarial antigen was measured using immunochromatographic card test in children < 5 years of age. Mosquitoes were collected by human landing catch from July to December. None of the 686 subjects tested were microfilaremic 12 months after the sixth MDA round. More importantly, circulating antigen was not detected in any of the 120 children tested, as compared with 53% (103/194) before the institution of MDA. The number of infective bites/human/year decreased from 4.8 in 2002 to 0.04 in 2007, and only one mosquito containing a single infective larva was observed 12 months after the final MDA round. Whether this dramatic reduction in transmission will be sustained following cessation of MDA remains to be seen.