Gross pathology specimen. The fragments of the 3 cm visible tapeworm are demonstrated above excised breast mass. This was identified as Spirometra spp. based on its white ribbon-like muscular appearance.

Histopathology slide. This demonstrates a cyst with associated lymphoid follicle containing interspersed eosinophils, histiocytes, and foreign body giant cell reaction. The organism wall is composed of an eosinophilic tegument. In other areas, calcareous bodies were present in the parenchyma. The inflammatory infiltrate is noted to be granulomatous in a few areas and this finding is most prominent in this section of the tissue where a portion of the organism is seen. 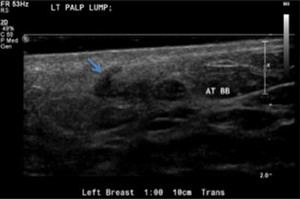 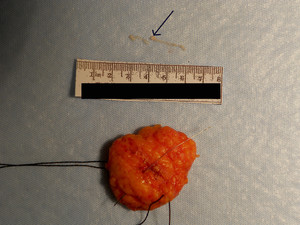 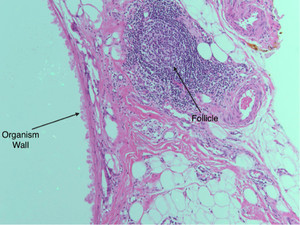 Sparganosis is a parasitic infection caused by Spirometra spp. and often presents as a subcutaneous swelling, most commonly noticed in the abdominal wall or extremities. Amphibians such as frogs ingest infected copepods (crustaceans that have ingested coracidia, i.e., Spirometra spp. embryos) and serve as a secondary intermediate host. Complete surgical excision is recommended for definitive diagnosis and treatment. Granulomatous inflammation is the most common histologic finding. Although dissemination can occur, most cases are localized. Serum enzyme-linked immunosorbent assay (ELISA) has been suggested as a potential surveillance tool. Medical therapy with antiparasitic agents, such as praziquantel, is not typically recommended but may be effective at high doses. Preventing recurrence thus depends on adequate surgical removal of the parasite. We report a case of a breast mass caused by sparganosis infection in a Chinese female whose likely exposure was due to frog consumption. The diagnosis was confirmed on surgical excision and no systemic antiparasitic therapy was required.