Schematic map of the sites of infection of the two patients and of detection of vectors and infected dogs. Concentric circles are 10 km apart.

Phylogenetic tree based on Leishmania species typing by Cytochrome b gene sequencing. 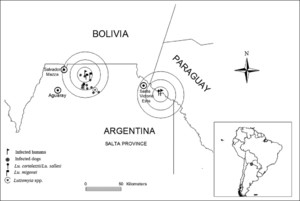 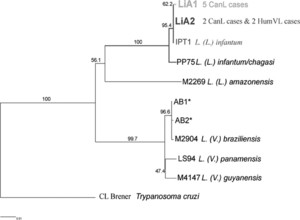 Cases of human visceral leishmaniasis (HVL) were not recorded until recently in the Chaco region of northwestern Argentina. Dogs were surveyed at the sites of infection of two HVL index cases in the Chaco region of Salta province. Canine cases (CanL) were diagnosed by two parasitological methods, two molecular methods targeting mini- and maxicircle DNA, and immunochromatographic dipstick. Among 77 dogs studied, 10 (13%) were found infected with Leishmania spp. In seven dogs and two humans, the infecting species was typed as Leishmania (Leishmania) infantum. The same genotype was detected in the human and two of the CanL. Although several diagnostic methods displayed weak or moderate agreement, the concordance values for serology versus maxicircle PCR were very good (Kappa index = 0.84). Sandflies captured in the area were identified as Lutzomyia migonei and Lu. cortelezzii/Lu. sallesi (cortelezzii complex). The focal appearance of leishmaniasis in dogs and humans in a sylvatic region and its relatively low prevalence of infection suggests that L. (L.) infantum transmission to dogs and humans may, in this region, stem from sylvatic reservoirs.