Malaria prevalence in China, 2004–2013. The columns of different colors show the change trend of total cases (black), local cases (gray), and imported from other countries (hoary). The black line indicated the malaria incidence during 2004–2013.

Distribution of malaria, China, in 2004 (A) and 2013 (B). Map was created by ArcGIS 10.1. The numbers following by the different color of squares indicate the reported case number ranges. Local cases were indicated with white columns in the map for each year.

Malaria in Yunnan province, 2004–2013. The columns of different colors show the change trend of total cases (black) and local cases (gray). The black line indicated the proportion of malaria in Yunnan and the whole country. 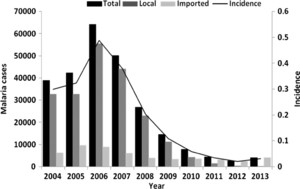 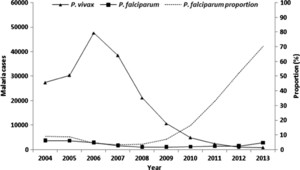 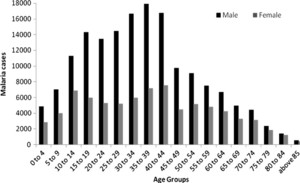 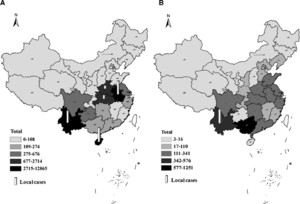 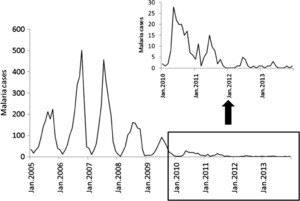 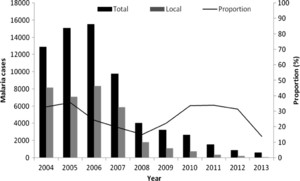 Analysis of Malaria Epidemiological Characteristics in the People's Republic of China, 2004–2013

This study aims to explore and characterize the malaria-endemic situation and trends from 2004 to 2013, to provide useful evidence for subsequently more effective strategic planning of malaria elimination in China. A total of 256,179 confirmed malaria cases were recorded in this period, and 86.8% of them were reported during 2004–2008. Between 2004 and 2008, Plasmodium vivax was the major species (72.2%) of malaria parasite. Most cases (67.3%) were found in male, and mainly in the age group of 35–39 years. A total of 236 deaths resulting from malaria were reported and nearly half (45.3%) of them were in Yunnan province. In all, 204,760 local malaria (79.9%) and 51,419 imported malaria (20.1%) were observed during 2004–2013. However, afterward the proportion of imported malaria continuously increased from 2004 (16.2%) to 2013 (97.9%). Moreover, 9,285 imported malaria cases were recorded during 2011–2013 in China, of which 5,976 cases (64.4%) came back from Africa. Overall, China has made achievements in controlling malaria, the locally transmitted malaria significantly declined in the past decades, by which the incidence has achieved historically the lowest levels. On the other hand, imported malaria has increasingly become a severe threat to malaria elimination. Therefore, to prevent the reintroduction of malaria, surveillance systems need to be well planned and managed to ensure timely case detection and prompt response at the elimination stage.