IL-5 level at inclusion and delivery in pregnant women with and without ART at Inclusion. Scatter plots include bars depicting medians with interquartile ranges of IL-5 measured at Inclusion (A) and at delivery (B) in 117 pregnant women without ART compared to 83 under ART at inclusion. IL-5 concentration was presented as the absolute level of cytokine on the left (y) axis. The non-parametric Mann Whitney U test was used to determine the significance of differences in cytokine levels (* P < 0.05). 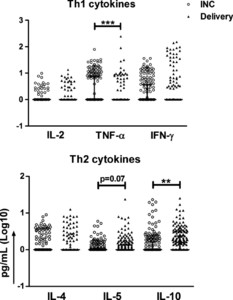 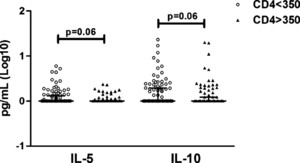 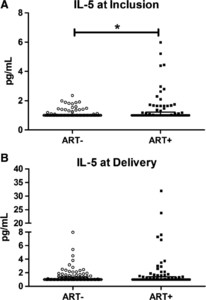 We investigated the circulating plasma levels of Th1- (Interleukin-2 [IL-2], tumor necrosis factor-α [TNF-α], interferon-gamma [IFN-γ]) and Th2-type (IL-4, IL-5, IL-10) cytokines in human immunodeficiency virus (HIV)-infected pregnant women living in a malaria-endemic area. We analyzed samples from 200 pregnant women included in the prevention of pregnancy-associated malaria in HIV-infected women: cotrimoxazole prophylaxis versus mefloquine (PACOME) clinical trial who were followed until delivery. Cytokine concentrations were measured by flow cytometry-based multiplex bead array. Significantly elevated levels of IL-10 and lower levels of TNF-α were observed at delivery compared with inclusion (P = 0.005). At inclusion, the presence of circulating IFN-γ, a higher CD4+ T cell count and having initiated intermittent preventive treatment of malaria with sulfadoxine pyrimethamine (SP-IPTp) were all associated with a lower likelihood of Plasmodium falciparum infection. At delivery, the inverse relationship between the presence of infection and circulating IFN-γ persisted, although there was a positive association between the likelihood of infection and the presence of circulating TNF-α. Initiation of antiretroviral therapy was associated with elevated IL-5 production. Consistent with our own and others' observations in HIV seronegative subjects, this study shows circulating IL-10 to be a marker of infection with P. falciparum during pregnancy even in HIV-infected women, although plasma IFN-γ may be a marker of anti-malarial protection in such women.