Proportions of bacterial pathogens identified. The proportion of bacteria identified from blood cultures is shown. Other species, each identified in one patient, were Haemophilus influenzae, Salmonella typhi, Streptococcus viridians, Acinobacter, Citrobacter, and Enterococcus. 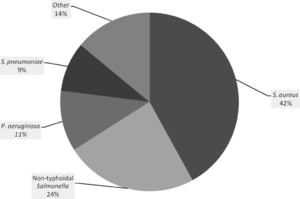 Bacteremia may be inappropriately treated as malaria in children admitted with a febrile illness in Africa. We determined the prevalence, clinical features, and spectrum of bacteremia among febrile children younger than 5 years of age admitted with a negative malaria test, but prescribed antimalarials at a referral hospital in Jinja, Uganda. After initial evaluation, a blood sample was drawn from 250 children for a complete blood count and bacterial culture. Of 250 samples cultured, 15 grew organisms presumed to be skin contaminants, and of the remaining 235 samples, 45 (19.1%) had bacteremia. Staphylococcus aureus (42%), non-typhoidal Salmonella (24%), Pseudomonas aeruginosa (11%), and Streptococcus pneumoniae (9%) were the most common bacterial isolates. On multivariate analysis, history of weight loss (odds ratio [OR] = 2.75; 95% confidence interval [CI] = 1.27–5.95), presence of pulmonary crackles (OR = 3.63; 95% CI = 1.40–9.45), and leukocytosis (OR = 2.21; 95% CI = 1.09–4.47) were independent predictors of bacteremia. At a referral hospital in Uganda, bacteremia was a remarkably common finding in children with febrile illness who were treated for malaria despite negative malaria test results.