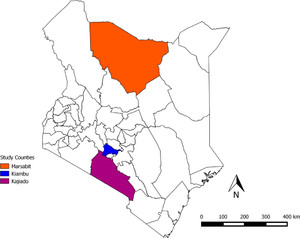 Strong Association Between Human and Animal Brucella Seropositivity in a Linked Study in Kenya, 2012–2013

Brucellosis is a common bacterial zoonotic infection but data on the prevalence among humans and animals is limited in Kenya. A cross-sectional survey was conducted in three counties practicing different livestock production systems to simultaneously assess the seroprevalence of, and risk factors for brucellosis among humans and their livestock (cattle, sheep, camels, and goats). A two-stage cluster sampling method with random selection of sublocations and households was conducted. Blood samples were collected from humans and animals and tested for Brucella immunoglobulin G (IgG) antibodies. Human and animal individual seroprevalence was 16% and 8%, respectively. Household and herd seroprevalence ranged from 5% to 73% and 6% to 68%, respectively. There was a 6-fold odds of human seropositivity in households with a seropositive animal compared with those without. Risk factors for human seropositivity included regular ingestion of raw milk (adjusted odds ratio [aOR] = 3.5, 95% confidence interval [CI] = 2.8–4.4), exposure to goats (herding, milking, and feeding) (aOR = 3.1, 95% CI = 2.5–3.8), and handling of animal hides (aOR = 1.8, 95% CI = 1.5–2.2). Attaining at least high school education and above was a protective factor for human seropositivity (aOR = 0.3, 95% CI = 0.3–0.4). This linked study provides evidence of a strong association between human and animal seropositivity at the household level.