Infoscitex Tent in “location 1” of Bolahun, Liberia. Three openings for mosquito entry on this side are marked.

Correlation of log (x + 1) transformed nightly catch numbers between the Infoscitex Tent and Human Landing Catch in one location in Liberia, and two locations in Burkina Faso. Dashed lines are linear regressions for each site individually, and the solid line is the regression from all sites combined. 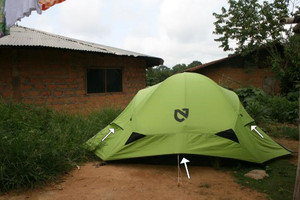 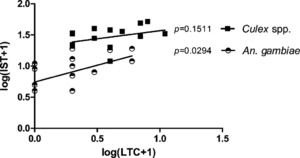 In this study, we characterize the ability of the previously described Infoscitex tent (IST) to capture mosquitoes in comparison to either the Centers for Disease Control Light Trap hung next to individuals under a bed net (LTC) or to human landing catches (HLC). In Senegal, the IST caught 6.14 times the number of Anopheles gambiae sensu lato (s.l.), and 8.78 times the Culex group V mosquitoes as LTC. In one of two locations in Burkina Faso, the IST caught An. gambiae at a rate not significantly different than HLC. Of importance, 9.1–36.1% of HLC caught An. gambiae were blood fed, mostly with fresh blood, suggesting they fed upon the collector, whereas only 0.5–5.0% from the IST had partial or old blood. The IST also caught outdoor biting species in proportions comparable to HLC. The results show this tent provides a safer and effective alternative to the skill-dependent, risky, and laborious HLC method.