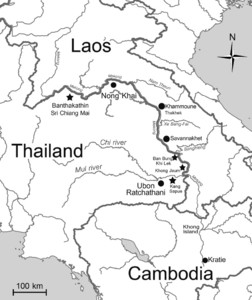 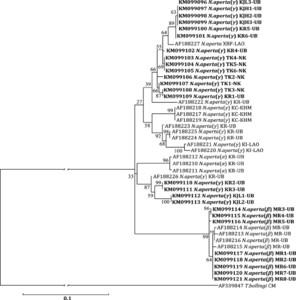 A New Population and Habitat for Neotricula aperta in the Mekong River of Northeastern Thailand: A DNA Sequence-Based Phylogenetic Assessment Confirms Identifications and Interpopulation Relationships

Neotricula aperta (Gastropoda: Pomatiopsidae), the snail intermediate host of Schistosoma mekongi, is found in Cambodia, Laos, and Thailand. We update information on the distribution of this species in the Mekong River and its tributary, the Mun River, in Thailand. DNA sequences of a portion of the mitochondrial cytochrome c oxidase subunit 1 were obtained from N. aperta collected from different locations and used to confirm species and strain identities. Specimens of the β-strain were found in the Mun River, whereas specimens of the γ-strain were found in the Mekong River. The γ-strain (with molecular confirmation of identity) is newly reported from Nong Khai Province, where it occurred in a habitat novel for this species: under paving slabs instead of under natural bed rocks, where agal aufwuchs is extensively located on the islet in the middle of the Mekong River. The new location is approximate 400 km upstream from the nearest previously known site for this species.