County of birth, county of current residence, and county of additional locations of importance by case-patient report numbers. 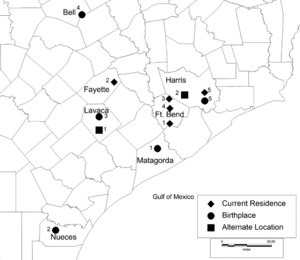 Autochthonous transmission of Trypanosoma cruzi in the United States is rarely reported. Here, we describe five newly identified patients with autochthonously acquired infections from a small pilot study of positive blood donors in southeast Texas. Case-patients 1–4 were possibly infected near their residences, which were all in the same region ∼100 miles west of Houston. Case-patient 5 was a young male with considerable exposure from routine outdoor and camping activities associated with a youth civic organization. Only one of the five autochthonous case-patients received anti-parasitic treatment. Our findings suggest an unrecognized risk of human vector-borne transmission in southeast Texas. Education of physicians and public health officials is crucial for identifying the true disease burden and source of infection in Texas.