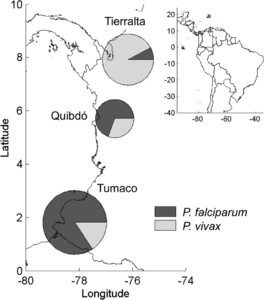 Malaria-Related Anemia in Patients from Unstable Transmission Areas in Colombia

Information about the prevalence of malarial anemia in areas of low-malaria transmission intensity, like Latin America, is scarce. To characterize the malaria-related anemia, we evaluated 929 malaria patients from three sites in Colombia during 2011–2013. Plasmodium vivax was found to be the most prevalent species in Tierralta (92%), whereas P. falciparum was predominant in Tumaco (84%) and Quibdó (70%). Although severe anemia (hemoglobin < 7 g/dL) was almost absent (0.3%), variable degrees of non-severe anemia were observed in 36.9% of patients. In Tierralta, hemoglobin levels were negatively associated with days of illness. Moreover, in Tierralta and Quibdó, the number of previous malaria episodes and hemoglobin levels were positively associated. Both Plasmodium species seem to have similar potential to induce malarial anemia with distinct cofactors at each endemic setting. The target age in these low-transmission settings seems shifting toward adolescents and young adults. In addition, previous malaria experience seems to induce protection against anemia development. Altogether, these data suggest that early diagnosis and prompt treatment are likely preventing more frequent and serious malaria-related anemia in Colombia.