Example of collected used net over cube-shaped frame for hole counting and measurements in the laboratory.

The proportional hole index of the long-lasting insecticidal nets (LLINs) presented in a box and whisker plot over the 3 years of follow-up and by brand. 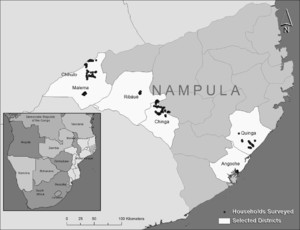 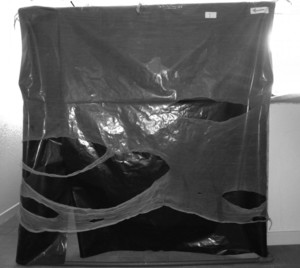 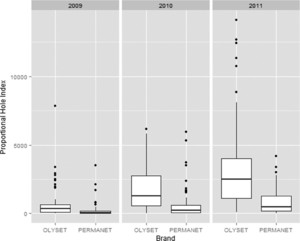 We conducted a prospective evaluation to measure the physical durability of two brands of long-lasting insecticidal nets (LLINs) distributed during a campaign in 2008 in Nampula Province, Mozambique. Households with LLINs tagged during the campaign (6,000) were geo-located (34%) and a random sample was selected for each of 3 years of follow-up. The LLINs were evaluated in the field and a laboratory for presence of holes and a proportional hole index (pHI) was calculated following the World Health Organization guidelines. We performed 567 interviews (79.0%) and found 75.3% (72.1–78.4%) of households retained at least one LLIN after 3 years; the most common cause of attrition was damage beyond repair (51.0%). Hole damage was evident after 1 year, and increased by year. Olyset had a significantly greater mean number of holes and pHI compared with PermaNet 2.0 brand (all P values ≤ 0.001). Additional information about LLIN durability is recommended to improve malaria control efforts.