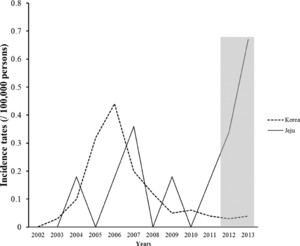 Since the first reported case of human brucellosis in 2002 in South Korea, its incidence has been increasing nationally. However, bovine brucellosis has not been present from 2005 to date on Jeju Island. Despite Jeju Island being considered a clean area for bovine brucellosis, we experienced an outbreak of human brucellosis between 2012 and 2013. Herein, we report cases with human brucellosis after ingestion of raw materials of fetal calf at a restaurant. Patients were identified by isolation of the Brucella abortus in their blood and joint tissue. Because all patients developed zoonosis by a faulty folk remedy, we emphasize the importance of educational programs to increase the awareness of zoonosis, and the need for active surveillance and detection of illegal distribution channels of the infected animal. After the outbreak, we took control of the involved restaurant and its illegal distribution channel, and there have been no further outbreaks.

Jeju Island is the largest island in South Korea with a population of ∼615,000. There were five brucellosis patients who underwent a folk remedy and ingested raw material of fetal calf at a local restaurant on Jeju Island from 2012 to 2013 (Figure 1).5 Four patients visited our hospital, one patient visited Samsung Seoul Medical Center. Since the experience in human brucellosis at our hospital in 2006,10 there have not been any patients with brucellosis reported between 2007 and 2011. However, because human brucellosis was sporadically detected during the 2-year period, we instituted a research for identification of causes for outbreak of human brucellosis. We reviewed medical records of the patients for epidemiological, clinical, and microbiological data. A serologic test with the standard tube agglutination (STA) was performed at the Jeju-si Community Health Center and confirmed human brucellosis. A suspension of B. abortus antigen (Difco Laboratories, Detroit, MI) was prepared as the antigen for the tube agglutination test. A positive STA titer was defined as ≥ 1:160.2 Diagnosis of human brucellosis was made positive STA or the isolation of Brucella species from blood culture and sterile samples.2 Samples were cultured using the Bact/Alert 3D automated system (bioMerieux Inc., Marcy-l'Etoile, France). The isolated pathogens were identified using the Vitek II system (bioMerieux Vitek Inc., Durham, NC).6 When human brucellosis was detected, we tested for specimens in tissue from wound and blood using nested polymerase chain reaction (PCR) amplification of 16S ribosomal RNA (rRNA) omp2a and omp2b for identification of the species.1 This study was approved by the institutional review board at Jeju National University Hospital (JNUH 2014-03-011).

Baseline characteristics of five cases of human brucellosis are shown in Table 1. All patients were male and immunocompetent. They consumed raw materials of fetal calf as a folk remedy at the same restaurant. Three patients (case 1, 3, and 5) ingested them to improve poor oral intake. The other two patients (case 2 and 4) ate the supposed remedy to aid surgical recovery and to alleviate liver cirrhosis, respectively. The range of the incubation period was 1 to 3 weeks. The restaurant had been selling the product to customers under the name “Songchi sashimi” (“an unborn calf”). The consumers believed that the food would relieve their hangover symptoms caused by alcohol consumption and restore their general health. Most of the patients presented with fever, weight loss, and hepatosplenomegaly. Laboratory tests showed neutropenia and thrombocytopenia in patients with bacteremia and mildly elevated aminotransferase. The patients had first visited an outpatient clinic, where they were referred to a tertiary hospital because of cytopenia or persistent fever. Brucella species was isolated from the blood of four patients and from knee joint tissue from the remaining patient. Brucella abortus was then confirmed by PCR. Because the fifth case was treated at another hospital, we only obtained medical records but not the actual sample strain of the patient. For treatment of brucellosis, antibiotic regimens included doxycycline (200 mg/day, per oral), gentamicin (5 mg/kg/day, intravenous), and rifampin (600 mg/day, per oral). The fourth case was treated with the same regimen except that the patient was not given rifampin because of liver disease. All patients improved after beginning the prescribed course of treatment.

Date to be diagnosed by brucellosis (month/day/year).

The most common strain of human brucellosis is worldwide Brucella melitenese. Its transmission to human occurs through the consumption of contaminated milk and cheese manufactured from the products of these animals.2 However, the most common strain is B. abortus in South Korea,11 Common risks for human brucellosis include the occupations of ranchers, veterinarians, and abattoir workers.6,11 Korean cattle are raised to produce meat, rather than milk, and meat products are seldom risks for infection because raw consumption of meat is rare and the number of organisms in muscle tissue is low. However, in areas like Jeju, where drinking animal blood or ingesting raw liver are local customs, foodborne infection is possible.2,12,13 A custom based on beliefs that raw materials of fetal calf can help ward off weakness, alleviate hangover, and boost energy levels is an inherent risk of human brucellosis on Jeju Island. By contrast, human brucellosis in Mediterranean regions is acquired from dairy cattle, goats, camels, and sheep.14 Previous studies did not report any clinical differences between B. melitensis and B. abortus. Sufficient data on virulence and clinical presentation of biotypes of B. melitensis is lacking.2 Compared with a recent outbreak of human brucellosis with B. melitensis in Peru,3 our patients were older (median age 51 versus 44 years), fever was dominant (5/5 versus 5/13), and bacteremia was more common (4/5 versus 4/13). The different etiologic origin showed a shorter incubation period (Table 1). Otherwise, other clinical characteristics are similar between the two strains. Our study also shares similar clinical characteristics compared with multicenter study of South Korea.11 However, limitation lies in comparison between the two strains of Brucella because of the small size of our data.

We reported an outbreak of human brucellosis to the public health authorities and visited the restaurant to investigate the food materials and the distribution process. Samples of the specimen, which were chosen at a different date and different materials but at the same restaurant, were taken for strain identification. We examined its supernatant solution after centrifugation. However, we did not identify any Brucella strains from the food material samples from the restaurant. After the investigation, the owner of the restaurant was restricted from selling raw fetal materials, and the livestock distribution process was more strictly controlled by the public health center in the Jeju Special Self-Governing Province, starting in September 2013. Since then, any new patient with brucellosis, associated with the ingestion of raw materials of fetal calf in Jeju, has not been registered in the web-based statistical system of KCDC, the Ministry of Health and Welfare since October 2013.5

Because Jeju Island was selected as a “Treasure Island of Environmental Assets” in 2013, any additional incidence of human brucellosis would pose critical challenges to public health including habitants and visitors on Jeju Island. It is believed that continuous surveillance of bovine brucellosis and monitoring of the illegal distribution by the public health center have effectively prevented further occurrences of the human brucellosis. An effective strategy for prevention of human brucellosis is prevention of bovine brucellosis and control of infected cattle before distribution. In addition, infected cattle may have been sold using an illegal distribution channel without stamping out. In this case, the restautrant owner received education for zoonosis. A government has been reinforced for surveillance and monitoring of imported livestock product to Jeju Island.