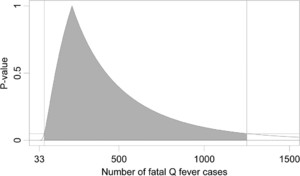 Q Fever is Underestimated in the United States: A Comparison of Fatal Q Fever Cases from Two National Reporting Systems

Two national surveillance systems capturing reports of fatal Q fever were compared with obtained estimates of Q fever underreporting in the United States using capture–recapture methods. During 2000–2011, a total of 33 unique fatal Q fever cases were reported through case report forms submitted to the Centers for Disease Control and Prevention and through U.S. death certificate data. A single case matched between both data sets, yielding an estimated 129 fatal cases (95% confidence interval [CI] = 62–1,250) during 2000–2011. Fatal cases of Q fever were underreported through case report forms by an estimated factor of 14 and through death certificates by an estimated factor of 5.2.

Q fever is a zoonotic disease associated with exposure to livestock. Infections may be asymptomatic, mild, or self-limiting; although fatalities are rare in the acute phase of illness, Q fever may lead to serious complications, and in the case of chronic Q fever, death may occur from endocarditis or vascular aneurysms.1 Because of its nonspecific clinical nature and the difficulty in obtaining conclusive diagnostic test results, Q fever remains a challenging disease to diagnose and monitor through national surveillance systems. Here, we match fatal cases of Q fever reported through two national data collection systems for 2000–2011. From this matching, we obtain an estimate of the total number of fatal cases of Q fever during the same time, and we use this to gauge the underreporting of Q fever in the United States.

State and local health departments report cases of Q fever to the Centers for Disease Control and Prevention (CDC) through case report forms (CRFs). Reported data include demographics: state and county of residence, date of birth, sex, race, and ethnicity; risk factors for Q fever: occupation, animal contact, exposure to unpasteurized milk, foreign travel, and ill family members; clinical information: symptoms, pre-existing medical conditions, whether hospitalized, whether the case survived, and for fatal cases the date of death; and laboratory information: results and dates of serological and other diagnostic testing.

Multiple cause of death.

The Multiple Cause of Death data (MCD) summarizes mortality data from death certificates for the United States.2 States report the underlying cause of death and contributing causes of death for decedents to the CDC through the National Vital Statistics System. Additional data include age, race, ethnicity, sex, and date of death.

The Chapman estimator for the population size was used to estimate the total number of fatal cases of Q fever in the United States during 2000–2011.4 Cormack's method of computing confidence intervals (CIs) was used by inverting Pearson's χ2 test of independence at α = 0.05, yielding an interval of fatal cases consistent with the hypothesis of independence between the CRFs and the MCD reporting systems.5 All computations were performed using R version 2.15.2.

A total of nine fatal cases were reported through CRFs from 2000 to 2011. Six cases were reported simply as Q fever from 2000 to 2007, before the case definition distinguished between acute and chronic Q fever.6 During 2008–2011, two cases were reported as acute Q fever and one as chronic Q fever; although one of these acute cases reported during 2008–2011 did not meet the new Council of State and Territorial Epidemiologists (CSTE) case definition.7 In the MCD data, a total of 25 decedents had Q fever listed as a cause of death on death certificates from 2000 to 2011. A single case matched on date of death, age, sex, race, and ethnicity between the CRFs and the MCD. One case in the CRFs data was missing ethnicity; however, this case did not match any decedents in the MCD data on the remaining criteria. There were no additional matches between the CRFs and the MCD when ignoring race and ethnicity. Based on these reporting systems, an estimated 129 fatal cases of Q fever likely occurred during 2000–2011, with a 95% CI of 62–1,250 (Figure 1). Fatal cases of Q fever were underreported through CRFs by an estimated factor of 14 and through MCD by an estimated factor of 5.2.

Using data derived from two national reporting systems, we have shown that Q fever mortality in the United States is significantly underestimated. Although MCD data do not differentiate acute Q fever from chronic Q fever fatalities, most Q fever-associated deaths are historically caused by the chronic form of infection.1

Because of the nonspecific presentation of acute Q fever, we believe the incidence of acute infection has long been greatly underdiagnosed and underreported in the United States. However, chronic Q fever tends to be clinically more distinct and more likely to result in fatal outcome. Although < 5% of acute Q fever cases are estimated to progress to potentially fatal chronic infections, 14% of cases Q fever reported to the U.S. CDC from 2008 to 2011 were chronic Q fever, presumably because the serious nature of illness lends itself to more aggressive diagnostic exploration.8 The data in this study suggest that although overrepresented in cases reported to CDC, chronic Q fever infections may also be poorly reported in the United States.

We believe that these two reporting systems are not independent, and this dependence results in correlation bias. Reporting through either system requires sufficient clinical suspicion or appropriate laboratory evidence to declare Q fever as the cause of death; therefore, exclusion from one system increases the chances of being excluded from the other. The relationship is approximately inversely proportional: if being reported to one system doubles the chances of being reported to another, the estimated number of fatal cases is then expected to be about one half of the actual number of fatal cases.9

Extrapolating these results to national reporting, the number of non-fatal Q fever cases was underreported in the United States during 2000–2011. We believe diagnostic workup to be more complete for fatal cases than non-fatal cases, many of which lie below the waterline of the epidemiological iceberg. Therefore, the number of cases reported to the CDC through CRFs underestimates the number of actual cases by at least a factor of 14. Using serology data from blood donors, the incidence of Q fever in the Netherlands was estimated to be underreported by a factor of 12.6, in close agreement to our results.10 Although only 474 reports meeting the CSTE case definitions were reported to the CDC during 2000–2012, we believe 6,794 cases (95% CI = 3,265–65,834) to be a lower bound on the number of Q fever cases that most likely occurred during this time.11 The estimated seroprevalence of Q fever in the United States is 3.1%.12 As seroprevalence is a measure of a population's exposure to the etiologic agent and antigenically related organisms, Q fever seroprevalence overestimates the cumulative incidence of Q fever. Our results are consistent with the national seroprevalence estimates: we present a smaller upper bound on the number of people in the United States with a history of Q fever. Our concurrent summary of national surveillance for Q fever presents reported case fatality rates of 2% and hospitalization rates of 62%, both consistent with under-reporting of Q fever.11

Our data are subject to important limitations. Because of the small number of reports, adding or deleting cases would change the point estimate, especially if the number of matches changed; and, the estimates presented here are not precise, as reflected by the width of the CI. In addition, the possibility of missed matches exists for this study, as transcription errors may have led to misclassification within these data. The misclassification of race and ethnicity are particularly prevalent; however, no cases matched when ignoring race and ethnicity.3,13