(A) Sabaroud's agar at 25°C, colonies are slow growing, with a wrinkled and folded surface, forming shapes suggestive of inverted cones or volcanoes. (B) Conidiophores and conidia of S. schenckii. Conidia are ovoid, one-celled, and smooth-walled. Conidiophores (black arrow) arise at right angles from the thin septate hyphae and are usually solitary. Conidia are formed in clusters on small denticles by proliferation of the conidiophore, their arrangement often suggestive of a flower. 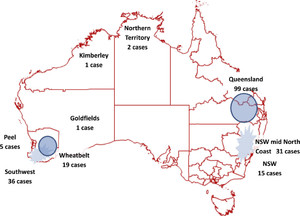 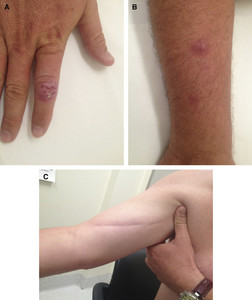 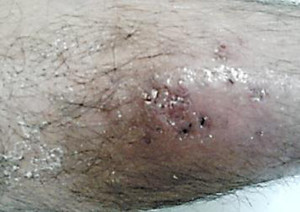 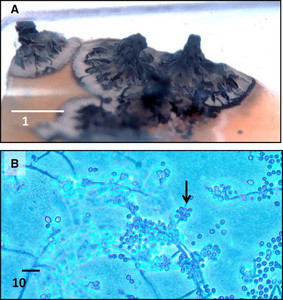 Sporotrichosis from the Northern Territory of Australia

We report three cases of lymphocutaneous infection caused by the thermally dimorphic fungus, Sporothrix schenckii from Australia's tropical Northern Territory. Two cases were acquired locally, making them the first to be reported from this region. All three cases presented with ulceration in the limb; however, the classical sporotrichoid spread was present only in the first two cases. Their occurrence within several weeks of each other was suggestive of a common source of environmental contamination such as hay used as garden mulch. Diagnoses were delayed in each case, with each patient having substantial exposure to ineffective antibiotics before the correct diagnosis was made. These cases bring the total number of reported sporotrichosis cases in Australia since 1951 to 199. Lessons from these cases are to consider the diagnosis of sporotrichosis in lesions of typical appearance, even in geographical settings from where this pathogen has not previously been reported.