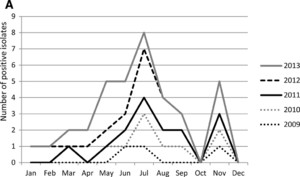 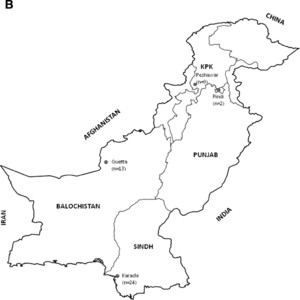 Crimean–Congo hemorrhagic fever virus (CCHFV) and dengue virus (DENV) are endemic to Pakistan. Patients presenting with symptoms of fever, bleeding, and rash cannot be distinguished without appropriate testing. We report data on 354 samples tested for CCHFV at The Aga Khan University Hospital in Pakistan between 2007 and 2013. All samples were tested for the presence of CCHFV RNA. Some samples were also tested for DENV RNA, NS-1 antigen, and/or reactive immunoglobulin M antibodies. Of 354 clinical specimens screened for CCHFV, 52 specimens were positive, with 24 cases in 2013 alone. Most cases were from Sindh and Baluchistan, which border other CCHFV-endemic regions: Iran and Afghanistan. Among CCHFV-negative samples, 168 samples were tested for DENV, and 36% of these samples were found to be DENV-positive. Rapid differentiation of CCHFV and DENV can prevent nosocomial transmission and result in time and cost savings for patients and healthcare workers.