Sensitivity analyses of aggregate medical cost of dengue illness and variation according to key costing parameters, millions of 2012 US$. LoS denotes length of stay. The central value is $548 million. 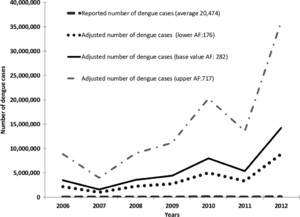 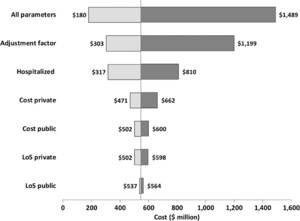 Economic and Disease Burden of Dengue Illness in India

Between 2006 and 2012 India reported an annual average of 20,474 dengue cases. Although dengue has been notifiable since 1996, regional comparisons suggest that reported numbers substantially underrepresent the full impact of the disease. Adjustment for underreporting from a case study in Madurai district and an expert Delphi panel yielded an annual average of 5,778,406 clinically diagnosed dengue cases between 2006 and 2012, or 282 times the reported number per year. The total direct annual medical cost was US$548 million. Ambulatory settings treated 67% of cases representing 18% of costs, whereas 33% of cases were hospitalized, comprising 82% of costs. Eighty percent of expenditures went to private facilities. Including non-medical and indirect costs based on other dengue-endemic countries raises the economic cost to $1.11 billion, or $0.88 per capita. The economic and disease burden of dengue in India is substantially more than captured by officially reported cases, and increased control measures merit serious consideration.