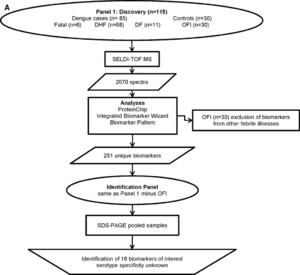 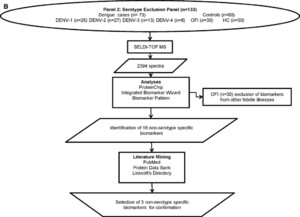 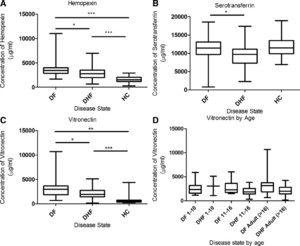 Half a million patients are hospitalized with severe dengue every year, many of whom would die without timely, appropriate clinical intervention. The majority of dengue cases are uncomplicated; however, 2–5% progress to severe dengue. Severe dengue cases have been reported with increasing frequency over the last 30 years. To discover biomarkers for severe dengue, we used surface-enhanced laser desorption/ionization time-of-flight mass spectrometry to analyze dengue virus positive serum samples from the acute phase of infection. Using this method, 16 proteins were identified as candidate biomarkers for severe dengue. From these 16 biomarkers, three candidates were selected for confirmation by enzyme-linked immunosorbent assay and Western blot: vitronectin (Vtn, 55.1 kDa), hemopexin (Hx, 52.4 kDa), and serotransferrin (Tf, 79.2 kDa). Vitronectin, Hx, and Tf best differentiated between dengue and severe dengue.