Time to blood culture positivity for 446 patients whose blood culture was positive for Burkholderia pseudomallei with either the A, BacT/Alert system (1A) or B, the conventional system, northeastern Thailand. 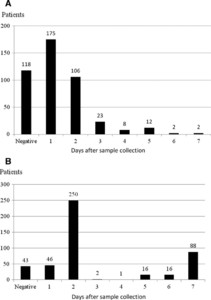 The Gram-negative bacillus Burkholderia pseudomallei is a Tier 1 select agent and the cause of melioidosis.1 The disease accounts for 20% of all community-acquired septicemias in northeastern Thailand,2 where melioidosis is the third most frequent cause of death from infectious diseases.3 Melioidosis is notoriously difficult to cure despite appropriate antimicrobial therapy and has a case-fatality rate of up to 43%.3 More than half of all melioidosis patients are bacteremic, and positive blood cultures for B. pseudomallei obtained at hospital admission and/or during hospitalization are strong prognostic markers for death.4

Although the automated blood culture system (BacT/Alert) is convenient and currently used in many laboratories in provincial hospitals in Thailand, it is unclear whether its sensitivity for the detection of pathogens is similar to that obtained using a conventional low tech system still commonly used in small hospitals in resource-limited settings.

In a retrospective study conducted during January 1, 2009–July 31, 2011 as part of routine patient care at Sappasithiprasong Hospital, a 1,000-bed tertiary-care hospital in northeastern Thailand, we compared the organisms isolated from more than 30,000 pairs of blood culture bottles by using the BacT/Alert system and the conventional system.

In conventional system, the culture medium is made in-house, blood culture bottles are incubated in a conventional incubator, and bacterial detection is made by direct visualization with or without regular sub-culture. During the study period, two 5-mL blood samples were regularly obtained from each patient 10–15 minutes apart. The first 5 mL of blood was inoculated into a 40 mL culture media BacT/Alert SA bottle (catalog no. 259789; bioMérieux, Durham, NC). The second 5 mL of blood was inoculated into an in-house bottle containing 40 mL of broth, which consisted of 37 g of brain heart infusion medium broth (catalogue no, 211059; Becton Dickinson, Franklin Lakes, NJ) and 0.25 g of sodium polyanatholesulfonate (catalog no.1000907362; Sigma, St. Louis, MO), in 1 liter of purified water. BacT/Alert bottles were incubated in the BacT/Alert automated blood culture system (bioMérieux) at 35°C for 7 days, and in-house bottles were incubated aerobically in a normal incubator at 35°C for 7 days. Examination of BacT/Alert bottles was done according to the directions provided by the manufacturer, and positive cultures were indicated on the computer screen accompanied by a beeping sound. Positive cultures in the in-house bottles were detected by direct visualization of cloudy broth.