rK28 rapid diagnostic test (RDT) comparison on visceral leishmaniasis (VL) patient serum. RDTs were run according to instructions in each manufacturer's product insert. Each of the prototype tests shows clear and distinct development of both control (C) and test (T) lines. 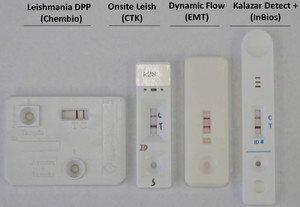 The development of rK39-based rapid diagnostic tests (RDTs) has greatly aided the diagnosis of visceral leishmaniasis, especially in the Indian subcontinent and Brazil, by offering high sensitivity and specificity. However, these tests have been less sensitive and less specific in sub-Saharan Africa. To improve upon the performance of rK39 in Africa, we engineered the fusion molecule rK28, which retained some of the rK39 repeats and combined them with repeat sequences from two additional Leishmania genes. This polyprotein was used in the development of several prototype RDTs by different commercial manufacturers with the goal of assessing relative performance in inexpensive formats. Here, we report field studies showing that the rK28 antigen could be readily adapted to a variety of RDT formats to achieve high sensitivity, generally > 90%, and adequate specificity to aid in the diagnosis of human visceral leishmaniasis in East Africa, Asia, and South America.