Health facility survey study area. Locations of rural health facilities included in the study as well as government primary schools and boundaries of the community survey. Note that Othoro Health Center is located along the main road approximately 20 km to the west of this area.

Malaria results per facility. (A) Seroconversion rates per health facility and transmission season (low [L] = October of 2011, high [H] = July of 2012) for facilities sampled in both surveys. Note that OmiroH and TalaH curves overlap. (B) PCR prevalence ordered according to transmission intensity including subpatent and asymptomatically infected individuals per health facility and transmission season. Bars are stacked in the order of the legend, with negative on the bottom and Asym/Sub on the top. 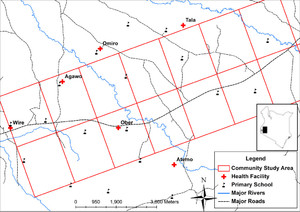 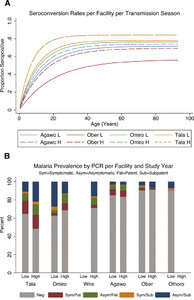 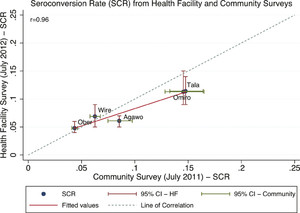 In endemic settings, health facility surveys provide a convenient approach to estimating malaria transmission intensity. Typically, testing for malaria at facilities is performed on symptomatic attendees, but asymptomatic infections comprise a considerable proportion of the parasite reservoir. We sampled individuals attending five health facilities in the western Kenyan highlands. Malaria prevalence by rapid diagnostic test (RDT) was 8.6–32.9% in the health facilities. Of all polymerase chain reaction-positive participants, 46.4% (95% confidence interval [95% CI] = 42.6–50.2%) of participants had infections that were RDT-negative and asymptomatic, and 55.9% of those infections consisted of multiple parasite clones as assessed by merozoite surface protein-2 genotyping. Subpatent infections were more common in individuals reporting the use of non-artemisinin–based antimalarials in the 2 weeks preceding the survey (odds ratio = 2.49, 95% CI = 1.04–5.92) compared with individuals not reporting previous use of antimalarials. We observed a large and genetically complex pool of subpatent parasitemia in the Kenya highlands that must be considered in malaria interventions.