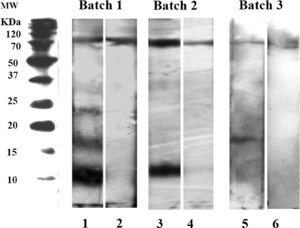 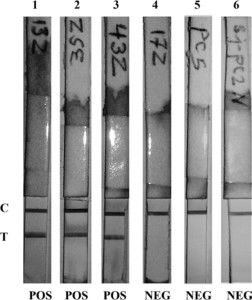 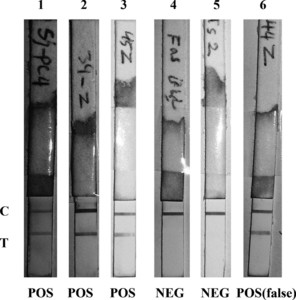 Cystic echinococcosis (CE) caused by infection with Echinococcus granulosus is of major concern for humans in many parts of the world. Antigen B was prepared from E. granulosus hydatid fluid, and Western blots confirmed eight batches showing a band corresponding to the 8-/12-kDa subunit with positive serum and no low-molecular mass band (< 15 kDa) with negative serum. The batches were pooled and used to prepare lateral flow immunoglobulin G4 (IgG4) and IgG dipsticks. Diagnostic sensitivity was determined using serum samples from 21 hydatidosis patients, and diagnostic specificity was established using sera from 17 individuals infected with other parasites and 15 healthy people. IgG4 dipstick had a diagnostic sensitivity of 95% (20 of 21) and a specificity of 100% (32 of 32). The IgG dipstick had a sensitivity of 100% (21 of 21) and a specificity of 87.5% (28 of 32). Thus, both IgG and IgG4 dipsticks had high sensitivities, but IgG4 had greater specificity for the diagnosis of human CE.