Rate of recrudescence in children with falciparum malaria treated with artemether-lumefantrine or artesunate-amodiaquine (A, both ACTs; B, individual ACT).

Changes in hematocrit before, during, and after treatment with artemether-lumefantrine (AL) or artesunate-amodiaquine (AA) in children with falciparum malaria. 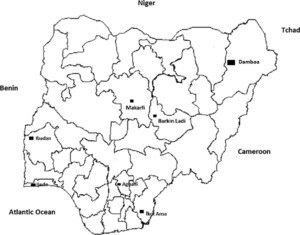 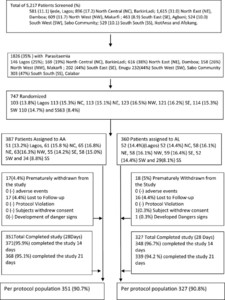 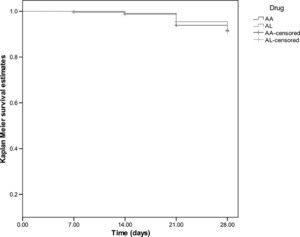 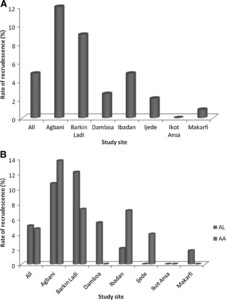 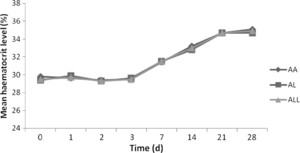 The efficacy of 3-day regimens of artemether-lumefantrine and artesunate-amodiaquine were evaluated in 747 children < 5 years of age with uncomplicated malaria from six geographical areas of Nigeria. Fever clearance was significantly faster (P = 0.006) and the proportion of children with parasitemia 1 day after treatment began was significantly lower (P = 0.016) in artesunate-amodiaquine—compared with artemether-lumefantrine-treated children. Parasite clearance times were similar with both treatments. Overall efficacy was 96.3% (95% confidence interval [CI] 94.5–97.6%), and was similar for both regimens. Polymerase chain reaction-corrected parasitologic cure rates on Day 28 were 96.9% (95% CI 93.9–98.2%) and 98.3% (95% CI 96.1–99.3%) for artemether-lumefantrine and artesunate-amodiaquine, respectively. Gametocyte carriage post treatment was significantly lower than pretreatment (P < 0.0001). In anemic children, mean time to recovery from anemia was 10 days (95% CI 9.04–10.9) and was similar for both regimens. Both treatments were well tolerated and are safe and efficacious treatments of uncomplicated falciparum malaria in young Nigerian children.