Typical cutaneous leishmaniasis skin lesions after biopsies were done. A shows a 3-mm punch with the tissue fragment still in it. B shows two biopsy sites after skin fragments were removed. Biopsies were taken less than 3-mm from the border of the lesion.

A shows a 3-mm skin biopsy fragment on a glass slide and another glass slide almost covering it. B shows the skin fragment being squashed, and it also illustrates the moment that slight movements are made to improve smear quality. C shows two amastigotes (long arrows) with nuclei (short arrows) and kinetoplasts (arrowheads) near a blood cell in a Press-Imprint-Smear stained with Giemsa under an oil immersion lens (100×). D shows a histopathological section stained with hematoxylin/eosin. Two amastigotes are seen with nuclei, and in one of them, the kinetoplast can be visualized (100×). 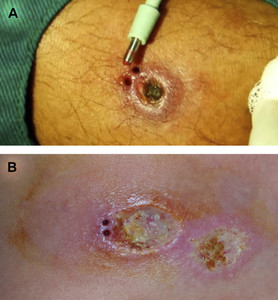 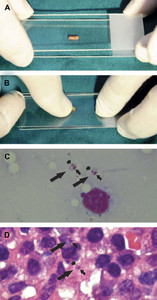 Press Imprint Smear: A Rapid, Simple, and Cheap Method for the Diagnosis of Cutaneous Leishmaniasis Caused by Leishmania (Viannia) braziliensis