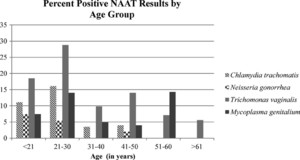 The study attempts to define socioeconomic, clinical, and laboratory correlates in vaginitis and other sexually transmitted infections in rural southwestern Haiti. A convenience sample of subjects recruited from a rural women's health clinic and attending an established clinic at the Haitian Health Foundation (HHF) clinic was studied. A standardized history and physical examination, including speculum examination, and collection of blood, urine, and vaginal swabs were obtained from the women at the rural clinic. Additional vaginal swab samples only for Nucleic Acid Amplification Test (NAAT) testing were obtained from women at the HHF clinic in Jérémie. Laboratory results from Leon subjects were positive for Gardnerella vaginalis in 41% (41 of 100), Trichomonas vaginalis in 13.5% (14 of 104), Candida sp. in 9% (9 of 100), Mycoplasma genitalium in 6.7% (7 of 104), Chlamydia trachomatis in 1.9% (2 of 104), and Neisseria gonorrhea in 1% (1 of 104) of patients. Human immunodeficiency virus (HIV) antibody tests were negative in 100% (103 of 103) of patients, and syphilis antibody testing was positive for treponemal antibodies in 7.7% (8 of 104) patients. For subjects from the HHF, 19.9% were positive for T. vaginalis, 11.9% were positive for C. trachomatis, 10.1% were positive for M. genitalium, and 4.1% were positive for N. gonorrhea. Infections with G. vaginalis, T. vaginalis, and Candida were the most common. N. gonorrhea, C. trachomatis, Candida sp., T. vaginalis, and M. genitalium infections were associated with younger age (less than 31 years old).