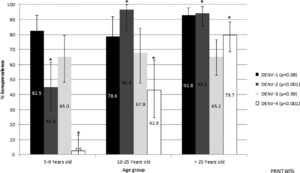 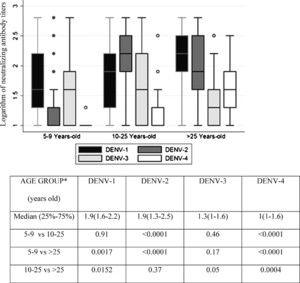 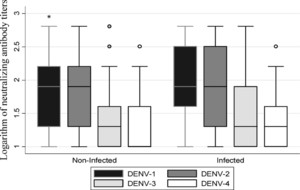 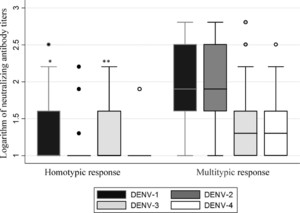 Seroprevalence of Neutralizing Antibodies Against Dengue Virus in Two Localities in the State of Morelos, Mexico

Humoral immune response against dengue virus (DENV) is an important component in dengue-endemic transmission. We conducted a cross-sectional nested cohort study to determine the seroprevalence and frequency of neutralizing antibodies against DENV serotypes in two endemic localities in the state of Morelos, Mexico. The cohort participants (N = 1,196) were screened to determine previous exposure to DENV. Overall seroprevalence was 76.6% (95% confidence interval [95% CI] = 73.6–79.2), and prevalence of neutralizing antibodies in the 5- to 9-year-old group was 82.5% (95% CI = 67.2–92.7), 45% (95% CI = 29.3–61.5), and 65% (95% CI = 48.3–79.4) for DENV-1, DENV-2, and DENV-3, respectively. For participants older than 10 years, the observed seroprevalence was above 60% for each serotype, except DENV-4 in the 10- to 25-year-old group (42.9%); 81% of humoral responses were multitypic. The outcomes of our study contribute to understanding the immune component of dengue transmission and provide focal information for the evaluation of vaccine candidates under development.