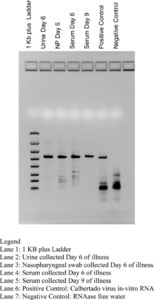 A woman who recently traveled to Thailand came to a local emergency department with a fever and papular rash. She was tested for measles, malaria, and dengue. Positive finding for IgM antibody against dengue and a failure to seroconvert for IgG against dengue for multiple blood samples suggested an alternate flavivirus etiology. Amplification of a conserved region of the non-structural protein 5 gene of the genus Flavivirus yielded a polymerase chain reaction product with a matching sequence of 99% identity with Zika virus. A urine sample and a nasopharygeal swab specimen obtained for the measles investigation were also positive for this virus by reverse transcription polymerase chain reaction. Subsequently, the urine sample yielded a Zika virus isolate in cell culture. This case report describes a number of novel clinical and laboratory findings, the first documentation of this virus in Canada, and the second documentation from this region in Thailand.