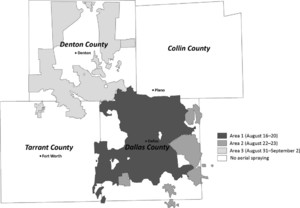 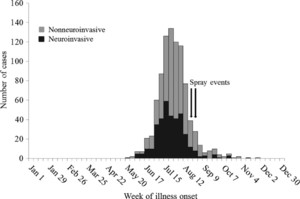 West Nile virus (WNV) is an arthropod-borne virus in the family Flaviviridae. It is maintained in nature in a transmission cycle involving mosquitoes and amplifying vertebrate hosts, primarily birds. The WNV is transmitted to humans through the bite of an infected mosquito. Approximately 80% of WNV infections are asymptomatic; the majority of symptomatic persons experience an acute systemic febrile illness that often includes headache, myalgia, or arthralgia.1 Less than 1% of infected persons experience neuroinvasive disease, which typically manifests as encephalitis, meningitis, or poliomyelitis-like acute flaccid paralysis (AFP).2 The WNV transmission is seasonal. The majority of patients have onset of illness during July–September, and disease incidence usually peaks during August.1 Localized disease outbreaks often occur.

During 2012, Texas experienced a substantial outbreak of WNV disease. The reported WNV neuroinvasive disease incidence was 3.24/100,000 persons, at least 1.6 times higher than any previous year since WNV disease cases were first reported in Texas during 2002.3 Among the 844 neuroinvasive disease patients, 356 (42%) resided in four adjacent north-central Texas counties as follows: Collin, Dallas, Denton, and Tarrant. In response to the outbreak in these four counties, the local health departments and mosquito control districts increased surveillance and control activities. Efforts to reduce the abundance of WNV-infected mosquitoes and risk for WNV transmission to humans included insecticide application to mosquito larval habitats (larviciding) and application of insecticide to kill adult mosquitoes by truck (ground-based spraying). After extensive consultation, aerial adulticide spraying was also initiated in areas of Dallas County during mid-August and Denton County during late August. This was the first time aerial insecticide spraying had been used for WNV control in north-central Texas, and limited data regarding the effect of aerial spraying on WNV disease are available. We evaluated the effect of aerial insecticide spraying on the incidence of human WNV disease in north-central Texas.

We defined a human WNV disease case according to the National Notifiable Diseases Surveillance System case definition (i.e., a person with a clinically compatible illness and laboratory evidence of WNV disease)4; each patient was a resident of one of the four counties, and had illness onset during January 1–December 31, 2012. Cases were classified as neuroinvasive (e.g., meningitis, encephalitis, or AFP) or nonneuroinvasive. Data were obtained from the Texas Department of State Health Services (DSHS). Incidence was calculated by using the U.S. Census Bureau 2010 midyear population estimates.5

Dates and locations of aerial and ground-based application of insecticides targeting adult mosquitoes were requested from municipalities and other jurisdictions in the four counties. We also conducted an Internet search for additional maps and ground spray data that were not provided. For aerial spray data, insecticide applications that occurred in a predefined area over multiple days were classified as a single aerial spray event. Locations of aerial and ground-based insecticide applications were mapped by using ArcMap 10.0 (Esri, Redlands, CA).

Because ground-based applications were numerous, varied in size, and were poorly documented, mapping of these activities was limited to the > 400 spray events that occurred during the 3 weeks before and after aerial spraying. Data were aggregated and the total area sprayed each week was calculated (Figure 1).

We assigned cut-off dates to define periods before and after aerial insecticide applications. In aerial-sprayed areas, we defined the cut-off as the earliest date by which the entire treated area was covered by aerial spraying, regardless of additional applications (i.e., August 19 for Area 1, August 22 for Area 2, and September 1 for Area 3). In each of the areas, additional applications covered areas previously sprayed.

In unsprayed areas, the cut-off dates were selected from the three sprayed areas. In Denton County, the cut-off date used in the county's sprayed area (September 1) was also assigned to the unsprayed area. For the untreated areas in Dallas, Collin, and Tarrant Counties, no single cut-off date could be assigned from an adjoining area because two spray events occurred in Dallas County and no aerial spray events were focused in Collin or Tarrant Counties. Therefore, for the unsprayed areas in these three counties, the cut-off date yielding the most conservative conclusions about the effectiveness of spraying was chosen. The date was selected by using a computer model that simulated possible courses of the outbreak and varied effectiveness of spraying. Nine scenarios were considered, incorporating three different patterns of disease rates over time (constant rate, decreasing rate, or increasing then decreasing rate), and three different levels of spraying effectiveness (not effective, reduces WNV neuroinvasive disease incidence by 25%, or reduces incidence by 50%); for each scenario, 5,000 data sets were generated. With each data set, we compared WNV neuroinvasive disease incidence before and after spraying by using each of the three possible cut-off dates (i.e., August 19, August 22, or September 1). As a result of this analysis, August 19 was determined to be the most conservative cut-off date for the untreated areas of Dallas, Collin, and Tarrant Counties.

The WNV neuroinvasive and nonneuroinvasive disease patients were categorized as residing within or outside an aerial-sprayed area. Patients without a known home street address were excluded. To account for the WNV disease incubation period, we subtracted the average incubation period of 7 days from each patient's symptom onset date to establish an estimated date of infection. This date was then used to categorize patients as being infected before or after the relevant cut-off date for their place of residence.

Assessment of data consistency and homogeneity.

To estimate the number of cases prevented by spraying, we calculated the expected number of cases in the absence of spraying by applying the change in IR from the untreated area to the treated area. Actual cases were subtracted from expected cases to determine the number of prevented cases. A 95% prediction interval was calculated. In consideration of the potential variability in the incubation period for WNV disease, we conducted a sensitivity analysis by using minimum and maximum incubation periods of 2 and 14 days.2 To account for the possible effect of ground-based insecticide applications in the aerially treated and untreated areas, we calculated the square kilometers and proportion of the total area covered by ground-based spraying in each area ∼3 weeks before and after the cut-off dates, and compared them by fitting a log-linear model to a three-way array formed by the aerial spraying, ground spraying, and timing classifications. For all analyses, a two-sided P < 0.05 was considered statistically significant.

The evaluation did not meet the definition of human subjects research under 45 CFR 46.102(d). Therefore, institutional review board review was not required.

A total of 902 cases of WNV disease were reported to Texas DSHS from the four counties during 2012, including 356 (39%) classified as neuroinvasive and 546 (61%) classified as nonneuroinvasive disease. The WNV disease cases occurred during May 25–November 25, and 757 (84%) of the cases had illness onset before the first aerial spraying, which started on August 16 (Figure 2). Among the 902 cases, two (0.2%) patients with neuroinvasive disease had unknown street addresses and were excluded from the analysis.

Among the 354 neuroinvasive disease cases, 192 (54%) were reported among residents of aerial-sprayed areas, and 162 (46%) were reported among residents of unsprayed areas. Woolf's test for homogeneity indicated that odds ratios for the three aerially treated areas were similar (P = 0.3), and four untreated areas were similar (P = 0.7), indicating these areas could be combined and evaluated as one treated and one untreated group.

In the combined aerial sprayed areas, the proportion covered by ground-based spraying was similar during the 3 weeks before (10%; 298 of 2,893 km2) and after (9%; 256 of 2,893 km2) the aerial applications (Table 2). However, in the combined areas where aerial spraying was not performed, the proportion covered by ground-based insecticide applications increased from 5% (334 of 6,583 km2) during the 3 weeks before the cut-off dates to 11% (738 of 6,583 km2) covered after the cut-off dates. The change in proportion of area covered before and after the cut-off dates was significantly greater in the unsprayed area (P < 0.001).

Area covered with ground-based insecticide spraying during the 3 weeks before and after the aerial spray applications—Collin, Dallas, Denton, and Tarrant Counties, Texas, 2012

P = 0.3 for the difference in the proportions covered before and after aerial spraying.

P < 0.001 for the difference in the proportions covered before and after aerial spraying.

Aerial spraying measures implemented for WNV control were associated with a reduction in WNV neuroinvasive disease. As expected, given that aerial spray events occurred relatively late during the outbreak, disease incidence decreased during the after-spray period in both treated and untreated areas. However, the relative change was greater in aerial-sprayed areas. Although the lower bound of the confidence interval was 0.98, the result nonetheless suggested a greater decrease in treated areas.

Previous studies have shown that aerial spraying can reduce the abundance and WNV infection rates of Culex mosquitoes.8–10 An evaluation of the effect of aerial spraying during an outbreak in Dallas, Texas, of St. Louis encephalitis virus, an arbovirus closely related to WNV, reported reductions in mosquito density and St. Louis encephalitis virus infection rates among mosquitoes after spraying.11 Data regarding the effect of aerial spraying on human WNV disease are limited. However, one previous study that compared WNV disease incidence between treated and untreated areas during a substantial WNV disease outbreak in Sacramento County, California, showed that aerial mosquito adulticiding reduced human WNV disease cases.12 Our findings support this conclusion and provide additional information because the California study evaluated the effect of spraying in areas where the primary WNV vectors are Culex pipiens and Culex tarsalis; our evaluation was conducted in counties where Culex quinquefasciatus is the main WNV vector.8,13,14

In analyzing the human disease data, we assumed that WNV infections were acquired at the residential address. Primary WNV vectors bite most actively from dusk to dawn when people are more likely to be at their places of residence, but infections could have been acquired elsewhere.16 We also assumed that aerial spraying's effect occurred within the boundaries defined by the aerial spray geographical data, but certain variability in insecticide application on the edges of the spray zone might have occurred. These factors might have resulted in misclassification of cases as occurring in treated or untreated areas. Finally, aerial spray events occurred during multiple days and at different times in each area. We used conservative cut-off dates to define the before and after periods and applied them to seemingly comparable nonsprayed areas. However, factors other than the aerial insecticide applications might have accounted for the changes in disease incidence before and after spraying and for the greater decline observed in treated versus untreated areas (e.g., differences in diagnosis rates or case classification, weather patterns, other mosquito control efforts, varying effects of spraying in different ecological areas, or increased vigilance with personal protective measures in aerial sprayed areas).