Performance of the CareStart RDT compared with the spectrophotometric method at G6PD activity levels from ≤ 0.5 to ≥ 5.6 U/g hemoglobin. The sensitivity and specificity as well as the positive and negative predictive values of the CareStart RDT to classify severely, moderately, or mildly deficient individuals from the sample population are presented with respect to the G6PD activity level (units per gram hemoglobin [Hgb]) measured by the spectrophotometric assay. 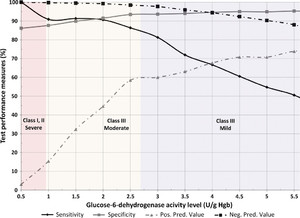 Search for other papers by Thomas A. Weppelmann in
Current site
Google Scholar
PubMedClose
,
Will T. Eaton
Will T. Eaton

Search for other papers by Bernard A. Okech in
Current site
Google Scholar
PubMedClose

Administering primaquine (PQ) to treat malaria patients with glucose-6-phosphate dehydrogenase (G6PD) deficiency can pose a serious risk of drug-induced hemolysis (DIH). New easy to use point-of-care rapid diagnostic tests are being developed as an alternative to labor-intensive spectrophotometric methods, but they require field testing before they can be used at scale. This study screened 456 participants in Gressier, Haiti using the Access Bio CareStart qualitative G6PD rapid detection test compared with the laboratory-based Trinity Biotech quantitative spectrophotometric assay. Findings suggest that the CareStart test was 90% sensitive for detecting individuals with severe deficiency and 84.8% sensitive for detecting individuals with moderate and severe deficiency compared with the Trinity Biotech assay. A high negative predictive value of 98.2% indicates excellent performance in determining those patients able to take PQ safely. The CareStart G6PD test holds much value for screening malaria patients to determine eligibility for PQ therapy.

Glucose-6-phosphate dehydrogenase (G6PD) deficiency and its association with primaquine (PQ) -induced hemolysis, also called PQ sensitivity, poses a major obstacle for malaria control strategies that attempt to block malaria transmission by targeting gametocytes.1 Affected individuals, many of whom are unaware of their G6PD status, may suffer oxidative stress triggered by PQ, leading to drug-induced hemolysis (DIH), which can be fatal in severely deficient individuals.2,3 The ability to rapidly identify this deficiency has become more important in recent years as malaria-endemic countries around the world adopt PQ into their standard treatment regimen.4 Concerns for G6PD-deficient individuals developing DIH after treatment with PQ have also delayed the use of this antimalarial drug in many countries.5 Because malaria transmission continues to occur in Haiti, with 32,000 cases confirmed in 2011, this new policy could represent a major population-level risk of DIH given the likely similarities between G6PD rates in modern Haitians and their ancestral West Africans.6 The determination of G6PD deficiency in patients is particularly relevant to the treatment of malaria in Haiti because of the recent addition of single dose PQ to the national malaria treatment policy, despite an absence of data on G6PD deficiency prevalence rates.4,6 More recently, G6PD deficiency rates were estimated to range from 14.9% to 24.7% of the population in a sample of 800 Haitians from the Ouest and Sud-Est Departments.7

The current quantitative standard methodology for detecting G6PD activity levels is the spectrophotometric assay, which measures the enzymatic activity of G6PD. This test requires a consistent source of electricity, refrigeration for reagents and substrates, information on patient hemoglobin levels, a spectrophotometer to measure the change of absorbance, and skilled personnel to perform the test, making it difficult to use in resource-poor settings. To increase the ability to perform point-of-care assessment of G6PD activity, Access Bio has recently developed the CareStart G6PD Qualitative Rapid Diagnostic Test (RDT). The CareStart G6PD Deficiency Test (Access Bio, Somerset, NJ) is a qualitative colorimetric test that uses a filter strip coated with reagents and substrates that changes color from white to purple in the presence of adequate G6PD concentrations. The manufacturer of the RDT stated that the test has at least a sensitivity of 95% for detecting classes I and II deficiency classified by the World Health Organization (WHO), diagnosing those individuals most at risk of experiencing DIH on treatment with PQ. To explore the feasibility of a less labor-intensive diagnostic test, we examined the performance of the CareStart test against the Trinity Biotech spectrophotometric assay (Trinity Biotech, St. Louis, MO), which has been used as a comparative standard for testing the performance of other G6PD qualitative tests.8,9

In total, 456 primary school children (267 females and 189 males) in Gressier, Haiti were tested using both methods during the month of May of 2013 as part of a larger study investigating malaria and G6PD deficiency in Ouest and Sud-Est Departments of Haiti. After informed consent by parent or legal guardian was received, local healthcare providers collected approximately 3 mL blood by venipuncture. The collected blood samples were kept in BD Vacutainer ethylenediaminetetraacetic acid (EDTA) treated tubes until laboratory analysis of G6PD activity. Samples were screened with the Access Bio CareStart RDT and the Trinity Biotech quantitative assay at the University of Florida field laboratory at constant temperature (25°C) within 48 hours of collection to standardize the performance of both assays.

The study was approved by the Haiti Ethical Review Committee, the University of Florida's Institutional Review Board, and the Office of Research Protections, US Army Medical Research and Materiel Command. Informed consent was obtained by physicians/healthcare workers on site from all adult participants and the parents or legal guardians of minors.

The CareStart G6PD Deficiency Test (G0223; Access Bio, Somerset, NJ) was used according to the manufacturer's instructions. Briefly, 2 μL blood was pipetted from EDTA vacutainers and added to the sample wells using the pipette provided followed by the addition of two drops of buffer supplied by the manufacturer. All results were read within 10 minutes of administering the test according to the manufacturer's guidelines. The Access Bio CareStart RDT was performed before running the Trinity Biotech quantitative assay to blind the researchers to potential bias in interpreting the color change of the RDT.

The Trinity Biotech G6PD Assay (kit no. 345B; Trinity Biotech, St. Louis, MO) uses a spectrophotometric method to quantify G6PD enzyme activity by measuring the production of nicotinamide adenine dinucleotide phosphate (NADPH) in the presence of substrate glucose-6-phosphate (G6P) and G6PD. The enzyme activity was determined by measuring the change in absorbance at a wavelength (λ) of 340 nm after a 5-minute incubation at constant temperature (25°C). Control blood samples with normal (no. G6888, Trinity Biotech, St. Louis, MO) and deficient (no. G5888, Trinity Biotech, St. Louis, MO) levels of G6PD enzyme activity were used as quality controls. The kit also requires that the activity be standardized to the amount of hemoglobin present, which was measured by a digital hemoglobin meter (HemoCue Hb 201 Plus; Hemocue Incorporated, Cypress, CA). As per the manufacturer's recommendations, G6PD activity levels that were measured above 19.5 U/g hemoglobin were not included in this study.

Classification of G6PD deficiency and statistical analyses of RDT performance.

The CareStart test was 90% sensitive in determining individuals with severe deficiency and 84.8% sensitive in determining individuals with moderate or severe deficiency. This test was also effective at detecting G6PD in normal population members, with a negative predictive value of 98.2%. These findings indicate a highly sensitive test, which would prove quite valuable in mitigating risks associated with DIH in G6PD-deficient individuals. Furthermore, the cost per CareStart G6PD test was approximately $1.50 USD compared with $2.14 USD for the Trinity Biotech assay. Given the low costs of the CareStart test compared with other G6PD diagnostic tests and its ability to be used for point-of-care testing with limited training required, screening malaria patients for G6PD deficiency at scale remains a feasible strategy in Haiti. Our data suggest that this rapid test is effective in identifying moderate to severe G6PD deficiency (less than 30% residual activity), which represents those individuals most at risk of experiencing DIH resulting from PQ therapy. The high negative predictive value of 98.2% for participants with severe and moderate G6PD activity translates into meaningful clinical information, where negative test results (purple color) are a strong indicator for normal G6PD enzyme levels. The low positive predictive values were affected by the prevalence of G6PD deficiency in this sample population and should not represent an impediment to the use of this RDT. Although G6PD deficiencies represent the most common enzymopathy in the world, the prevalence in most afflicted populations remains relatively low (10–30%).12

Weaknesses identified in this study include the possibility of operator error because of the subjective nature of qualitative colorimetric results (similarity of dark red and purple colors) and a reduction in test performance in determining G6PD mild participants. Because G6PD enzyme concentrations in patients with mild deficiency are sufficient to generate a purple color change (negative result), this test is unable to accurately determine mild forms of G6PD deficiency, which was noted in a similar study conducted in Cambodia.13 However, these individuals are at a lower risk of DIH when treated with PQ. Likewise, using alternative antimalarial drugs to treat patients with ambiguous test results has little impact on their clinical management and represents a viable strategy to further decrease the risk of DIH. The development of a quantitative or semiquantitative rapid test would be helpful to avoid misinterpretation of RDT results.

This study used the Trinity Biotech quantitative assay as a comparative assay to determine true positives and true negatives, and although this assay is the standard method to determine G6PD activity levels, it is still subject to error. Our small sample size of severely G6PD-deficient samples represents an additional limitation, because a single false negative drastically reduced test sensitivity for classes I and II G6PD deficiency. Because only blood collected from venipuncture was used in this study, we were unable to compare the performance of the rapid test with blood from a sterile finger prick. Although we believe that blood obtained by venipuncture and finger prick would have similar G6PD enzyme concentrations and hence, test performance, we were unable to evaluate the differences between the two sampling techniques.

The results from this study suggest that the CareStart RDT is highly specific and effective at determining population members with normal levels of G6PD activity. The CareStart G6PD test is an attractive tool for point-of-care G6PD deficiency testing given that it is relatively inexpensive and requires significantly less time and training to implement than other methods. In countries that have adopted PQ into their malaria treatment guidelines, this RDT could be used before treatment of malaria patients, which would allow clinicians to administer PQ while substantially reducing the risk of adverse treatment outcomes in G6PD-deficient patients. Findings suggest the CareStart RDT represents a practical option for the identification of G6PD-deficient individuals in Haiti and should be incorporated into current malaria elimination strategies that use PQ.