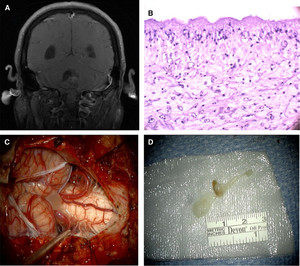 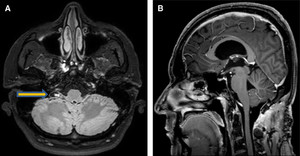 A 33-year-old male presented for resection of an intracranial mass after 1 year of recurrent headaches and dizziness. Cerebrospinal fluid testing had shown a lymphocytic pleocytosis (163 cells/mm3, 59% lymphocytes, 20% neutrophils) with normal protein (42 mg/dL), glucose (54 mg/dL), cultures, and serologic testing. Multiple brain magnetic resonance imaging (MRI) studies showed enlarged ventricles but no masses. Immediately before surgery, a discrete cystic structure was visible on imaging (Figure 1). A large cyst consistent with neurocysticercosis was identified intraoperatively. No additional lesions were observed, and he had complete resolution of symptoms. He received 7 days of albendazole, dexamethasone, and levetiracetam per guidelines for a solitary lesion.1 Follow-up imaging using higher resolution (1 mm versus 6 mm planes) and volumetric sequencing displayed an extra-parenchymal cyst with a visible scolex lateral to the fourth ventricle (Figure 2). As a result of surgical excision, there was no evidence of a residual fourth ventricle cyst. His MRI spine was negative, and he received two additional months of therapy until radiographic resolution, per guidelines for extra-parenchymal lesions.1 This thin walled extra-parynchymal cyst was uncovered with higher quality imaging using both finer planes and an ultrafast MRI technique known as volumetric imaging (e.g., fast imaging employing steady-state acquisition [FIESTA] sequencing). Ideally, higher quality imaging would have revealed these cysts preoperatively. However, his films were suggestive of mass lesion and thus volumetric imaging was not performed until the surgical pathology provided a definitive diagnosis. This case displays the role that high quality volumetric imaging plays in the diagnosis of neurocysticercosis.