Contrast-enhanced CT (A, axial and B, coronal) of the abdomen showed fatty hepatomegaly, mild splenomegaly, and bilaterally heterogeneous enlargement of adrenal glands, with the right side showing necrotic changes. 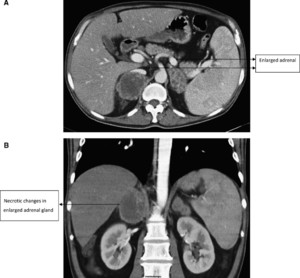 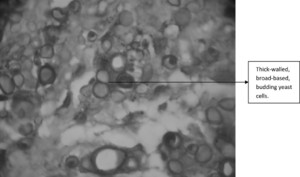 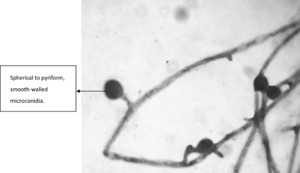 Autochthonous Blastomycosis of the Adrenal: First Case Report from Asia

Blastomyces dermatitidis is a thermally dimorphic fungi causing systemic mycosis in individuals who visit or reside in endemic areas, with the risk of acquisition increasing with immune suppression. Other than the endemic regions of North America and northeastern Ontario, blastomycosis is widely distributed on the African continent.1 Among the Asian countries, one case each has been reported from Israel and Saudi Arabia. Of the many Indian cases reported in literature, only five cases have been conclusively proven to be blastomycosis, of which three cases were autochthonous and two cases were imported.2 All autochthonous cases have been reported from the states of Rajasthan, Uttar Pradesh, and Madhya Pradesh in northern India.3–5 Disseminated blastomycosis can involve many different organs, like skin, and osteoarticular and genitourinary systems, but it rarely involves the adrenals. We present the first autochthonous case of adrenal blastomycosis from Asia.

A 53-year-old male, working in Arunachal Pradesh, presented with decreased appetite and loss of almost 15 kg over a 4-month period that was associated with low-grade fever. He has been smoking for the last 30 years, is a diabetic for the last 5 years, and has never traveled outside of India. Vital signs included temperature of 38.3°C, pulse of 84/minute, respiratory rate of 30/minute, and blood pressure of 110/70 mmHg. The physical examination revealed mild pallor and no icterus, cyanosis, clubbing, lymphadenopathy, or pedal edema. Examinations of the respiratory and central nervous system were unremarkable. The patient denied any dyspnoea or expectorations. Cardiovascular system examination revealed normal heart sounds without any murmur. The abdomen was soft, non-tender, and non-distended, with a palpable liver 2 cm below the cost margin. Results of initial investigations included a total leukocyte count of 5,790 cells/mL, hemoglobin of 12.3 μg/dL, alkaline phosphatase of 240 IU/L, werum glutamic oxaloacetic transaminase (SGOT) of 52 IU/L, serum glutamic-pyruvic transaminase (SGPT) of 36 IU/L, serum albumin of 2.9 g/dL, serum globulin of 4.7 g/dL, a C-reactive protein level of 22 mg/L, and erythrocyte sedimentation rate of 64 mm/hour. Serology for hepatitis B surface antigen (HBsAg), human immunodeficiency virus (HIV), and hepatitis C virus (HCV) antibodies was negative. Thyroid and renal functions were normal. Ultrasonography (USG) of the abdomen showed mild hepatosplenomegaly and bilateral adrenal enlargement. Contrast-enhanced computerized tomography (CT) of the chest was normal. Abdominal CT showed fatty hepatomegaly, mild splenomegaly, and bilaterally heterogeneous enlargement of adrenal glands, with the right side showing necrotic changes (Figure 1). Clinical examination revealed no signs of Addison's disease, and his serum cortisol was also normal (15.6 μg/dL). To rule out malignancy, a CT-guided biopsy was done and sent for histopathological examination.

Tissue sections on hematoxylin/eosin staining showed no evidence of malignancy but instead, showed plenty of rounded structures resembling yeast cells, which were also periodic acid–Schiff-positive (Figure 2), surrounded by suppurative granulomatous inflammation. Gomori's methenamine silver staining showed black-colored, thick-walled, broad-based budding yeast cells consistent with B. dermatitidis. A repeat CT-guided biopsy yielded pus, which on culture, grew multiple white colonies of a slow-growing mold on Sabouraud dextrose agar (SDA) after 12 days of incubation at 28°C. Examination of Gram-stained smears of SDA cultures revealed thin septate hyphae bearing spherical to pyriform smooth-walled microconidia compatible with the mold form of B. dermatitidis (Figure 3). The isolate's dimorphic character was verified by conversion of the mold to its yeast form by inoculating it on brain heart infusion agar incubated at 37°C. Microscopic examination of Gram-stained slides of the resulting growth revealed numerous thick-walled and broad-based budding yeast cells, generally measuring 8–16 μm in diameter, that are typical of B. dermatitidis.

The 18S ribosomal RNA sequence of the isolate was studied using pan fungal primers PFPRIM-F3 (5′ GACTCAACACGGGGAAACT 3′) and PFPRIM-R4 (5′ ATTCCTCGTTGAAGAGCA 3′) as described by Embong and others.6 DNA extraction was done using the yeast Genomic DNA Kit (Himedia Laboratories Pvt. Ltd., Mumbai, India). The amplicons were purified, and both strands of amplified DNA fragments were sequenced. Analysis of the full sequence was performed with an automatic DNA sequencer using the ABI Prism Big-Dye Terminator Cycle Sequencing Ready Reaction Kit (Perkin Elmer, Applied Biosystems, Foster City, CA). The nucleotide sequence (474 bp) was compared with sequence data available in the GenBank database using the BLAST program at http://www.ncbi.nlm.nih.gov/BLAST, which revealed 99% similarity to the sequence of strains of B. dermatitidis (Telomorph: Ajellomyces dermatitidis) with accession numbers M55624.1 and X59420.1. The patient was treated with itraconazole at 200 mg two times daily for 18 months. Monthly follow-up showed remarkable improvement, with USG of the abdomen showing complete resolution of all adrenal lesions.

Blastomycosis is caused by a thermally dimorphic fungi B. dermatitidis, which is endemic in North America in the regions bordering the Great Lakes and northeastern Ontario, with an incidence of 1–12 cases/100,000 people. In non-endemic areas, systemic mycosis is seen in individuals who visit endemic areas, with the risk of acquisition increasing with immune suppression.6,7 The asexual form A. dermatitidis exists as a mold in nature. Airborne conidia, when inhaled, gets lodged in the alveoli, where it undergoes transition to yeast form, which is seen in mammalian tissue and culture at 37°C. Wet earth enriched with animal droppings, rotting wood, and decaying vegetables is considered to be the ecological niche for B. dermatitidis.8 Although a predominance of males has been reported in the literature,8 66% (4/6) of cases reported from India are in females. Initial reports of blastomycosis were from immunocompetent patients, and it was never considered as an opportunistic pathogen in patients with compromised immune function. However, recent studies have shown that 25% of the patients with blastomycosis have an underlying immunosupressed condition, like malignancy or HIV, whereas 22% of the patients had diabetes mellitus.9 The majority of patients with blastomycosis present with pulmonary manifestation.10 If the immune response in the lung fails to contain the infection, lymphohematogenous dissemination occurs, with foci of infection involving any organ system. Among the extrapulmonary sites, skin (40–80%), bone (6–48%), genitourinary (10–30%), and central nervous systems (5–10%) are involved (decreasing order of frequency).8,11 Involvement of the adrenal gland is uncommon and often results in Addisonian crisis, albeit late in the disease, because more than 90% of the adrenal tissue is destroyed before it manifests clinically.12 Diagnosis is by fine-needle aspiration; then, the aspirate is subjected to wet-mount preparation, cytologic and histologic examinations, and the gold standard, fungal culture.11

Reports of blastomycosis in patients residing in non-endemic areas based only on histopathological findings are often fraught with error.2,7 The tissue reaction is characteristically suppurative granulomatous with neutrophilic predominance. However, the nature of fungi is difficult to ascertain only by histology. Blastomycosis is widely distributed on the African continent,1 and among the Asian countries, one case each has been reported from Israel13 and Saudi Arabia14 both with osteoarticular involvement. There are six questionable case reports of blastomycosis from China, which are devoid of any tenable documentary evidence.15 The first case of blastomycosis from India was reported in 1983,15 and since that time, an astounding number of sporadic case reports (31/33) have been published in the literature from India; 70% (24/34) of these cases, however, were misdiagnosed cases of mycosis, where the etiological agent was wrongly identified.2,7 Of five authentic cases of human infection, two cases were imported, three cases were autochthonous, and none of the cases involved the adrenals. All autochthonous cases have been reported from the states of Rajasthan, Uttar Pradesh, and Madhya Pradesh in northern India.3–5 Although there is no well-defined endemic foci for blastomycosis in India, there are five case reports in animals, including bats, bird droppings, cattle, dog, and monkey, strongly indicating its endemicity in India.16–19 Interestingly, two of these cases (involving cattle and monkeys) were reported from the states of West Bengal and Assam, which neighbor the state of Arunachal Pradesh from which our patient hailed. Itraconazole for 6–12 months is recommended for mild to moderate disease and has a cure rate of 90% in non–life-threatening blastomycosis, whereas severely ill patients and patients with osteoarticular involvement should be treated for 12 months.20 Considering the bilateral involvement of adrenals in our patient, we continued the treatment for 18 months, leading to complete recovery (Table 1).

Synopsis of autochthonous case reports on blastomycosis from Asia (1983–2012)

Blastomycosis is a rare disease in Asia with no well-defined area of endemicity. We report the sixth autochthonous case from this region and the first case with bilateral adrenal involvement; it was successfully treated with itraconazole.