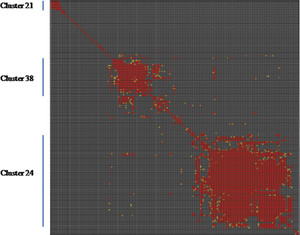 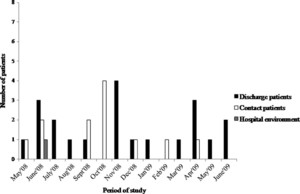 Epidemiology of Staphylococcus aureus Harboring the mecA or Panton-Valentine Leukocidin Genes in Hospitals in Java and Bali, Indonesia

Data of Staphylococcus aureus carriage in Indonesian hospitals are scarce. Therefore, the epidemiology of S. aureus among surgery patients in three academic hospitals in Indonesia was studied. In total, 366 of 1,502 (24.4%) patients carried S. aureus. The methicillin-resistant S. aureus (MRSA) carriage rate was 4.3%, whereas 1.5% of the patients carried Panton-Valentine leukocidin (PVL)-positive methicillin-sensitive S. aureus (MSSA). Semarang and Malang city (odds ratio [OR] 9.4 and OR 9.0), being male (OR 2.4), hospitalization for more than 5 days (OR 11.708), and antibiotic therapy during hospitalization (OR 2.6) were independent determinants for MRSA carriage, whereas prior hospitalization (OR 2.5) was the only one risk factor for PVL-positive MSSA carriage. Typing of MRSA strains by Raman spectroscopy showed three large clusters assigned type 21, 24, and 38, all corresponding to ST239-MRSA-SCCmec type III. In conclusion, MRSA and PVL-positive MSSA are present among patients in surgical wards in Indonesian academic hospitals.