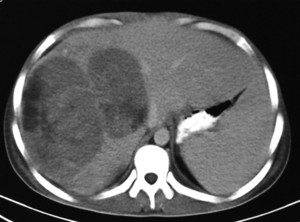 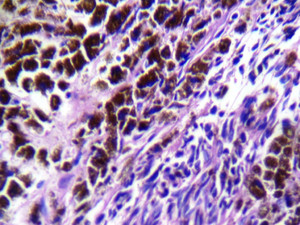 Salmonella enterica serotype Typhi (S. typhi) is the causative agent of typhoid fever, an acute systemic infection that is common in developing countries, associated with low socioeconomic levels and poor sanitary conditions.1 Humans are the only natural reservoirs and can be asymptomatic carriers.2 Transmission usually occurs through the fecal–oral route by ingestion of contaminated food or water.2 In endemic areas, the majority of cases occur in children and adolescents, 3–19 years of age.2

The estimate of global burden of typhoid fever is 21,650,974 illnesses and 216,510 deaths annually.3 Regions with a high incidence of typhoid fever (> 100/100,000 cases/year) include South Central Asia and Southeast Asia.3 In Brazil, an average of 500 cases of typhoid fever have been reported each year since 2003; the majority from the Amazon region, followed by the Northeast part of the country.4

We present a case of typhoid fever complicated by pyogenic liver abscesses (PLA) overlying hepatic metastases of melanoma. This case illustrates the importance of associated underlying diseases, such as cancer, and complications of Salmonella infection.

Computed tomography of the abdomen showed hepatosplenomegaly, multiple nodules scattered throughout the hepatic parenchyma of heterogeneous content without ascites, but with bilateral basal pleural effusion (Figure 1). Upper gastrointestinal endoscopy showed only discrete chronic gastritis. After initiation of ceftriaxone and metronidazole, the patient showed slight improvement of his general status and was taken to Hospital Universitário Walter Cantídeo (HUWC) for further work-up.

Salmonella typhi was isolated from the liver percutaneous puncture collected material and ceftriaxone and metronidazole were replaced by ciprofloxacin IV. The patient showed partial improvement of pain, no nausea or vomiting, but daily bouts of fever persisted. Subsequent USG showed an increase in volume of the liver collections (15.8 cm × 11.0 cm). A second drainage was performed and 20 mL of chocolate-like material was collected and sent for laboratory analysis. Culture samples were negative for pyogenic bacteria and microscopic examination did not show Entamoeba histolytica. Because of the persistence and increase of the nodules by USG, a liver biopsy was performed and specimens stained by hematoxylin and eosin (H&E) were diagnostic of a neoplasm, characterized by atypical spindle cells with eosinophilic cytoplasm often containing melanin and vesicular nuclei sometimes with eosinophilic macronucleoli, arranged in irregular fascicles, permeated by foci of desmoplasia. No hepatic parenchyma was seen in the samples (Figure 2). Histology was conclusive for fusiform malignant melanoma. The patient underwent chemotherapy, with no significant response, and then developed hepatic failure and was lost to follow-up.

The PLA are an uncommon clinical entity and many times difficult to diagnose and treat.9 In the majority of patients with PLA, the illness begins in an extrahepatic focus of infection, with subsequent spread to the liver by way of the portal or systemic circulation or the biliary tree.10 The PLA may also arise as a direct extension of adjacent upper abdominal suppuration or as a complication of blunt or penetrating trauma to the liver.10 Peak incidence occurs in the fifth decade, with the biliary tract as the most common starting point.9 The most frequent pathogenic agents are Gram-negatives, primarily Escherichia coli, followed by Gram-positive aerobes, with anaerobes in a lesser frequency.5 More recently, differences in the microbiological spectrum has been observed between continents.11

Since the beginning of the antibiotic era, liver abscess caused by Salmonella organisms have been very rare12 and in most cases, the species involved is S. typhi.13 Based on a report by Moralejo and others, from Spain (2002),5 of the literature review from 1995 to 2000, 14 cases of liver abscess by S. typhi have been published; of these, eight occurred associated with liver injury described as: amebic abscesses, echinococcal cysts, or intrahepatic hematomas. In a study by Ferreira and others (2007)9 from Portugal, reviewing 119 cases of PLA occurring from 1986 to 2004, they found only typhoid fever as the sole predisposing condition. In a report by Sony and others (1994)7 no associated disease, except positive amebic serology, was observed in a 47-year-old African male with multiple hypoechoic lesions in both lobes of the liver, the largest in the right lobe, which grew S. typhi in the needle aspirate.

There are several possibilities for pathogenesis of Salmonella abscesses: one is the migration of S. typhi to the liver in an asymptomatic carrier, as suggested in the report of Moralejo and others,5 and also in the report of Ciraj and others.6 The other mechanism is hematogenous migration from the focus during the intestinal phase of typhoid state.5 Through this mechanism, abscesses are most likely to be found in multiple organs, also multiple in the liver, as in the current report and in the cases described previously.7,14

Previous authors have noted that suppuration by any bacteria may complicate metastatic tumors in the liver, as reported by Trump and others (1978)10 in a patient with cloacogenic carcinoma and PLA within hepatic metastasis. Other investigators have attempted to clarify the clinical course of PLA in patients with various cancers. In a retrospective study, from January 1980 through December 1993, Yeh and others15 studied 52 cases of PLA related to preexisting or coexisting malignant disease from a total of 542 patients with PLA in Taiwan; in 32 patients, the cancers were originated from the hepatic parenchyma, biliary system, and pancreas, whereas 20 patients had cancer originating from other sites. These authors concluded that PLA can be a presentation of underlying hepatopancreatobiliary malignant disease and carries a severe prognosis.

Clinical manifestations of liver abscess caused by underlying malignant disease were fever, chills, right sided hypochondrial pain, hepatomegaly, nausea and vomiting, malaise, weight loss, and jaundice, all of which were indistinguishable from those with benign causes.15 The similarities of findings between these two entities may contribute to an almost 2-fold higher mortality rate of PLA caused by underlying malignant illness compared with PLA in the absence of malignancy.15 In many cases, tumor necrosis may be difficult to differentiate from abscess based on clinical exam and imaging alone.16 On the other hand, considering that up to a quarter of patients with liver metastases have fever and symptoms of infection, this picture can mask an underdiagnosed PLA.13

The PLA caused by S. typhi requires drainage by open or percutaneous methods, in addition to prolonged courses of antibiotics.1 Recommended therapy is intravenous ceftriaxone or fluoroquinolones for 14–21 days.1 Alternate therapy for susceptible strains is co-trimoxazole, ampicillin, or chloramphenicol for 14–21 days.1

In our case report, the fact that the patient came from a rural area in the state of Ceará, with little access to clean water, illustrates the association between poor sanitary conditions and S. typhi infection. In addition to the epidemiological setting, a highlight of this case was the discovery of liver metastases of a melanoma of which the primary site was undetermined. Based on the review of Moralejo and others,5 more than a half of the published cases of liver abscess by S. typhi had an underlying condition, we assume that the melanoma metastasis was the predisposing condition in this case. In our review of the literature, this is the first report of PLA caused by S. typhi in a metastatic melanoma.

In summary, we describe an unusual presentation of Salmonella typhi infection in a patient with persistent symptoms and no improvement despite treatment and emphasize the need to investigate for underlying malignant condition in cases of pyogenic liver abscess.