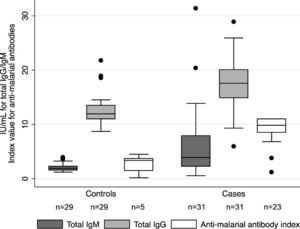 Malaria infections in pregnancy are associated with adverse outcomes for both mother and child. There are few data on hyper-reactive malarial splenomegaly, an aberrant immunological response to chronic or recurrent malaria in pregnancy. This retrospective assessment reviewed the impact of mefloquine treatment on pregnant women with suspected hyper-reactive malarial splenomegaly in an area of low malaria transmission in the 1990s, showing significant reductions in spleen size and anemia and anti-malarial antibody titers without any notable negative effect on treated women or their newborns.