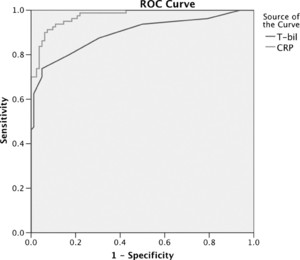 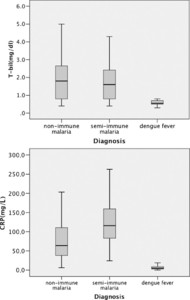 DF and malaria are major tropical infectious diseases. In GeoSentinel Surveillance surveys carried out from 2007 to 2011, DF and malaria accounted for 28.7% and 14.6% of fevers, respectively, in returning travelers, and they were the most common causes of febrile illness in this population worldwide.1 Clinical manifestations of DF and malaria are similar (i.e., fever accompanied by non-specific symptoms, including headache, arthralgia, myalgia, and gastrointestinal symptoms). Both diseases can also cause thrombocytopenia. Therefore, it is difficult to distinguish DF from malaria as a cause of febrile illness among returning travelers from tropical regions, especially in clinical settings with limited resources, where specific diagnostic tests and/or experienced laboratory technicians are not available.

DF is endemic mainly in southern and southeastern Asia, whereas malaria is endemic mainly in sub-Saharan Africa.1 However, the wide distribution of both diseases makes them difficult to differentiate based solely on geographic origins. Falciparum malaria is also endemic in rural areas of southeastern Asia, whereas vivax malaria can be found in southcentral Asia. Similarly, DF is endemic in all regions of Africa, and outbreaks have recently been reported in Angola and Kenya.2,3

The study was conducted at the travel clinic in the National Center for Global Health and Medicine (NCGM) in Tokyo, Japan, which is a GeoSentinel Network site. NCGM has 700 inpatient beds and functions as one of the main reference centers of infectious diseases in Japan. Febrile patients who visited the travel clinic and were diagnosed with DF or malaria during the study period (January of 2005 to March of 2013) were included in the study. Patients were excluded if they did not have a fever at the first presentation or if they were not diagnosed with DF or malaria.

Diagnosis of malaria was made by both conventional microscopic examination of Giemsa-stained thin blood films and rapid diagnostic test (BinaxNOW Malaria Test; Binax, Inc., Portland, ME). If the malaria parasite morphology was undifferentiated by microscopic examination, diagnostic polymerase chain reaction (PCR) was performed at the Research Institute of the NCGM. DF was diagnosed on the basis of real-time PCR (TaqMan RT-PCR), enzyme-linked immunosorbent assay (ELISA; immunoglobulin M [IgM] and IgG), and rapid diagnostic test for detection of non-structural 1 (NS1) antigen (Standard Diagnostics Inc., Korea). The nucleotide sequences of PCR products were determined with BigDye Terminator, version 3.1 (Applied Biosystems, Foster City, CA) to confirm the detection of the dengue virus genome.

All analyses were performed using IBM SPSS Statistics for Windows, version 20 (IBM Corp., Armonk, NY). Sensitivity, specificity, positive predictive value (PPV), and negative predictive values (NPV) for CRP and T-bil were calculated using a diagnostic test calculator (MedCalc Software; http://www.medcalc.org/calc/diagnostic_test.php). The Mann–Whitney U test was used to compare continuous variables. A two-sided P value < 0.05 was considered statistically significant. An ROC curve was generated for several cutoff values based on the difference of mean and median values of study groups, and AUC was tested against a null AUC of 0.5.

In total, 85 (50 men and 35 women) DF cases were confirmed during the study period. The mean age was 32.8 ± 12.9 years. No case of severe dengue was diagnosed. The median fever duration before presentation was 3.0 (IQR = 0–8.0) days. There were no significant differences in fever duration before presentation between malaria and DF groups (P = 0.74).

Sensitivity, specificity, PPV, and NPV of CRP and T-bil for several threshold values

Clinical histories, physical examination findings, and laboratory findings, such as anemia, help diagnose malaria. However, because the clinical manifestations of DF and malaria are similar, it is challenging to diagnose DF or malaria in travelers returning from regions where both DF and malaria are endemic, such as southeast Asia, south Asia, sub-Saharan Africa, Oceania, Latin America, and the Caribbean. Similarly, specific diagnostic tests are necessary for diagnosis, but they are not always available. It is important to distinguish between DF and malaria, because malaria can be fatal if treatment is delayed. Except for severe dengue, DF is generally a self-limiting disease. Our study suggests that CRP and T-bil are useful for distinguishing between DF and malaria in returned travelers.

In our study, differences in laboratory findings of DF and malaria were found in WBC, Ht, Plt, T-bil, LDH, and CRP values. In addition, CRP and T-bil had high AUCs of ROC curves (≥ 0.9). We found that CRP and T-bil are useful for distinguishing between DF and malaria.

Leukopenia, caused by bone marrow suppression by the dengue virus, is a common finding and a useful diagnostic feature for DF.4,5 Thrombocytopenia, however, has been observed in both DF and malaria patients.4,6 In our study, Plt levels were lower in malaria patients than dengue patients at the first presentation. In DF, Plt levels have been reported to be lowest 3–6 days from onset when the fever is about to resolve.7 Therefore, because DF patients without fever were excluded in our study, Plt levels were lower in malaria patients than DF patients. Taylor and others8 reported that Plt levels were a diagnostic finding for malaria; however, it is not useful to distinguish between DF and malaria, because thrombocytopenia is a characteristic finding in both diseases. Anemia caused by hemolysis of parasitized red blood cells increased splenic sequestration, and clearance of erythrocytes is common in malaria patients. Kain and others6 reported that, in their study population of Canadian travelers, 41% of the patients diagnosed with malaria presented with anemia. Our study found that 32.6% of malaria patients had anemia at the first presentation. However, increased Ht levels are often observed because of hemoconcentration. In our study, the value of Ht in DF patients was significantly higher than the value in malaria patients, but it was not found to be useful for distinguishing between DF and malaria. In addition to anemia, increased LDH levels from hemolysis of parasitized red blood cells were also observed in malaria patients.

Jaundice and an increase of T-bil levels are frequently observed in patients with severe malaria,9 but they are rarely observed in DF. Taylor and others8 reported that hyperbilirubinemia is the most diagnostic finding for malaria, with sensitivity of 38% and specificity of 95% in returning travelers. Our study results are in accordance with this report; we found that the increase in T-bil is a distinguishing laboratory finding in malaria patients compared with DF patients. CRP is an acute phase reactant, and markedly elevated levels of CRP are strongly associated with infection. Levels of CRP may also be elevated in patients with viral infections, although generally not to the degree seen in patients with bacterial infections.10,11 Simon and others11 evaluated the accuracy of determination of CRP levels for differentiating bacterial infections from viral fever and reported a sensitivity and specificity of 86% (95% CI = 65–95%) and 70% (95% CI = 19–96%), respectively. CRP levels are also elevated in malaria patients and useful in assessing malaria severity and follow-up.12–14 Premaratna and others15 reported that CRP was useful to distinguish between DF with right iliac fossa pain and acute appendicitis. In their report, all 12 DF patients had a CRP level < 12 mg/L.

Because malaria and DF rarely occur in developed countries, rapid and easy access to specific tests or rapid diagnostic tests for malaria and DF are available only in limited hospitals and/or clinic settings. Giemsa stains are available in many hospital laboratories; however, few laboratory technicians have been trained to identify these diseases, thereby greatly decreasing the sensitivity and specificity of Giemsa stains for the diagnosis of malaria. Our study suggests that combining Giemsa stain results with CRP/T-bil values would enable physicians to differentiate malaria from dengue in returned travelers from endemic areas. Negative Giemsa stain and lower CRP and T-bil values would indicate DF rather than malaria.

In resource-limited settings, specific diagnostic tests, such as rapid diagnostic tests, are expensive; therefore, many cases of malaria are diagnosed without laboratory tests in endemic regions.16 Such overtreatment of malaria has been tolerated in the era of inexpensive and safe monotherapy. However, with the introduction of artemisinin-based combination therapy (ACT), presumptive treatment becomes economically and clinically less acceptable. The test for CRP is an inexpensive laboratory test17 compared with rapid diagnostic tests, and physicians can perform these tests without experienced laboratory technicians.

Our study has some limitations. We compared laboratory findings only in DF and malaria patients. According to GeoSentinel Surveillance during 2007–2011, DF and malaria cover 42.5% of febrile illness in returned travelers; this study does not include other febrile illnesses, such as typhoid fever, traveler's diarrhea, viral hepatitis, and schistosomiasis. The results of this study may not be applicable to all returning travelers. Additional prospective studies are needed to prove that CRP and T-bil are useful for diagnosis in all febrile patients returning from tropical regions.

Another limitation of our study is that we could not evaluate the usefulness of CRP and T-bil in severe DF or dengue hemorrhagic fever (DHF)/dengue shock syndrome (DSS) patients, because there were no severe DF or DHF/DSS patients included in this study. The enrollment criteria used in this study (i.e., febrile patients) might have contributed to excluding severe DF and DHF/DSS cases; vascular permeability of severe DF or DHF/DSS patients usually increases on days 3–7 when defervescence occurs.

In conclusion, CRP and T-bil are useful for distinguishing between DF and malaria in returning travelers. Lower CRP and T-bil values suggest DF, whereas higher values suggest malaria. These parameters may be helpful for diagnosis in hospitals where specific diagnostic tests are not available and resources are limited.