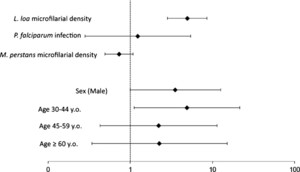 Although ivermectin treatment can induce serious adverse events (SAEs) in individuals harboring high Loa loa microfilaremia (mf), not all patients with high mf levels develop such reactions, suggesting that cofactors may be involved. A study was conducted in Cameroon to investigate the possible role of Plasmodium coinfection at the time of ivermectin treatment in the development of SAEs. Before their first ivermectin treatment, thick smears were obtained from 4,175 individuals to determine the burden of Plasmodium sp., L. loa, and Mansonella perstans. After treatment, 18 (4.3 per 1,000) patients developed a non-neurologic SAE. Logistic regression analysis, adjusting for age, sex, P. falciparum infection, and M. perstans infection intensities, confirmed that L. loa mf was the main risk factor for SAEs. We found no evidence that coinfection with P. falciparum at the time of ivermectin treatment was associated with the occurrence of Loa-related SAEs in this population.