Plasmodium falciparum parasite densities according to Schistosoma haematobium egg load at different times (results adjusted on others factors presented in the Table 4). 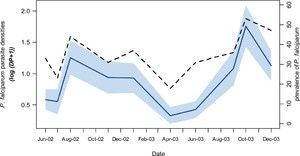 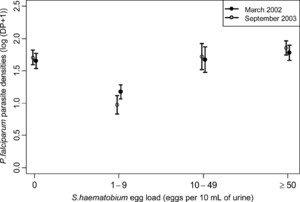 Coinfection with Plasmodium falciparum and Schistosoma haematobium: Additional Evidence of the Protective Effect of Schistosomiasis on Malaria in Senegalese Children

Parasitic infections are associated with high morbidity and mortality in developing countries. Several studies focused on the influence of helminth infections on malaria but the nature of the biological interaction is under debate. Our objective was to undertake a study to explore the influence of the measure of excreted egg load caused by Schistosoma haematobium on Plasmodium falciparum parasite densities. Ten measures of malaria parasite density and two measures of schistosomiasis egg urinary excretion over a 2-year follow-up period on 178 Senegalese children were considered. A linear mixed-effect model was developed to take data dependence into account. This work showed that children with a light S. haematobium infection (1–9 eggs/mL of urine) presented lower P. falciparum parasite densities than children not infected by S. haematobium (P < 0.04). Possible changes caused by parasite coinfections should be considered in the anti-helminth treatment of children and in malaria vaccination development.