A low power view of the cross section of the cyst with higher power views of the indicated regions in the letter panels (A–E). Please see the text for a full description. The (*) marks the neck of the cysitcercus. (A) A low power view of a cross section of the lesion showing the central cyst and surrounding capsule (black line perpendicular to the cyst wall). (B) A higher power view showing an intracapsular region of inflammation at the lower left of the figure and an adjacent moderate inflammation in the capsule (**). A middle layer of collagen is seen at the extreme right of the micrograph (***). (C) A higher power view of the scolex on the right side of the image and the neck (*), emanating from the scolex, and containing hematoxylin staining calcareous corpuscles (arrow). (D) A higher magnification of the capsular inflammation exterior to the collagen layer. (E) A higher magnification of the layers of the capsule. There is an intracapsular region of hemotoxylin stained degenerated cells occupying the left of the image, the middle layer of collagen (**) and the outer layer consisting of a mononuclear infiltrate at the lower right of the image.

(A) Low power view of another cross section of the cyst again showing the capsule and spuriously empty the central cavity once occupied by the cyst. (B) The rectangular region in (A) is enlarged showing a linear array of masses of calcareous corpuscles. (C) A third cross section showing the scolex with suckers (white arrow) and likely hooklets in the middle of two of the suckers and the neck with pleated sheets of tegument (*). (D) Immunostaining for glial fibrillary acidic protein (GFAP) in the adjacent brain tissue (****) showing extensive astrogliosis. 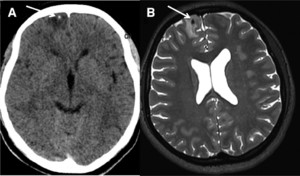 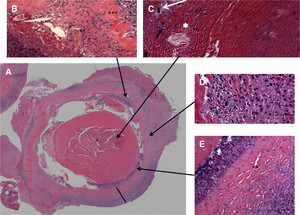 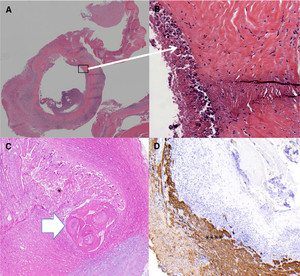 Here, we present the second report of the histopathology of a Taenia solium calcification giving rise to perilesional edema. This has important implications, because if perilesional edema lesions are inflammatory in character, immunosuppressive or anti-inflammatory medications, not just antiepileptic drugs alone, may be useful to prevent or treat recurring episodes in such patients.

Calcified Taenia solium cysts are the most common radiological finding in neurocysticercosis (NCC), with between 10% and 20% of the population in endemic populations exhibiting this feature on head computed tomography (CT).1 Although most individuals with calcified cysts never experience seizures, they are commonly foci of seizure activity. The most persuasive evidence is the intermittent appearance of perilesional edema around a small subset of calcifications in persons presenting with seizures.1–11 Reports have documented the phenomenon in many endemic regions. Of 110 persons followed prospectively in Lima, Peru who had a history of seizures, only calcifications as defined by imaging, and a positive cysticercosis serology, 50% of those with recurring seizures showed perilesional edema.5 In most endemic regions, relatively few persons with epilepsy show viable degenerating cysts leaving calcified cysts as the most common radiological finding associated with epilepsy caused by NCC,1 amounting to about 29% of all epilepsies in affected areas.12

The pathophysiology of perilesional edema is unclear mostly because of the paucity of direct examination of calcifications involved. The most favored hypothesis is that perilesional edema is caused by inflammation, perhaps as a result of intermittent release and/or recognition of enmeshed parasite antigen.13 However, others hypothesize perilesional edema is a result of seizure activity or release of ionic calcium.13 This is an important distinction, as therapies could differ, with immunosuppressive medications or antiepileptic drugs alone, respectively.

A 22-year-old previously well Hispanic female presented to her local emergency department after a witnessed seizure at work on November 2012. In the hours preceding the development of tonic–clonic jerking, she recalled two episodes of hot/cold flashes and a diffuse headache. There was no accompanying aura, photophobia, phonophobia, weakness, or numbness. She was amnestic of the subsequent events and next recalled awakening in the hospital. She denied any personal or family history of seizure or prior head trauma. There was no positional component to her headache, recent vision changes, nausea or vomiting. Although she denied chronic headaches, she recalled a severe diffuse headache 6 months prior of several hours duration that spontaneously resolved.

The patient immigrated from Honduras to the United States in 2004 and from that date lived in an apartment in central Virginia. There was no other history of international travel. She lived with roommates born in the United States. She denied tobacco or alcohol use, and was primarily a vegetarian. As a child In Honduras she played with neighborhood pigs, however there was no known history of tapeworm infection or ingestion of undercooked pork, and living conditions in Honduras included indoor plumbing and running water.

Histopathology shows a circular structure with specific layering (Figures 2A and 3A). There is a central eosinophilic mass, which is spuriously retracted from the surrounding encircling host-derived capsule consisting of a concentric layer of collagen, with inner and outer regions of dense infiltrates (Figures 2A and 3A). The central mass consists of a degenerated but still recognizable cyst (Figure 2A and C) consisting of a scolex with suckers (Figure 3C) and structures consistent with hooklets and a neck (Figures 2A[*], 3C[*]). The latter is a mass arising from the scolex consisting of folds of recognizable tegument (Figures 2A[*], 3C[*]) that contain many calcareous corpuscles, calcium-laden bodies pathognomonic for cestodes (Figure 3B). The surrounding host-derived wall (Figure 2A, perpendicular line) or capsule consists of a collagenous layer (Figure 2B and E) and an exterior layer containing dense mononuclear host infiltrates (Figure 2D and E) consisting of plasma cells, lymphocytes, monocytes, and limited numbers of eosinophils. Inflammatory regions are also seen interior to the collagenous layer. In some places, masses of calcareous corpuscles form hematoxylin staining crescents adjoining the inner wall of the capsule, just inside the outer cyst tegument (Figure 3A and B). In other areas the inner capsule is lined mostly with cellular debris (Figure 2B and E). Amorphous calcifications are not present. The fibrous capsule is surrounded by gliotic cortical parenchyma with exuberant reactive astrocytosis as highlighted by dense staining by immunohistochemistry for glial fibrillary acidic protein (GFAP)(****) (Figure 3D).

Postoperatively the patient did well and a follow-up MRI scan 3 months later revealed an unchanged cystic structure in the third ventricle, which, based upon its continued appearance (isointense T1/hypointense T2) was felt to be most compatible with a colloid cyst, although the possibility of NCC mimicking a colloid cyst was considered and remains possible.15,16

This is the second case describing the histopathology of a calcified cysticercus causing a well-documented episode of perilesional edema associated with a seizure. The histopathology is that of a degenerated cysticercus with considerable intracystic and intense capsular inflammatory response, consisting of mononuclear cells, some plasma cells, and a few eosinophils. The relative lack of eosinophils is likely caused by preoperative administration of high dose corticosteroids. The overall structure of the degenerated cysts and the inflammatory nature of the lesion are very similar to the findings of the first case report of an excised calcified cyst associated with perilesional edema14; both show a degenerated cysticercus and a surrounding capsule with intense inflammation.

What is responsible for the calcification seen in CT and MRI imaging? Both cases showed dense aggregates of calcareous corpuscles of a surprising degree in the degenerated cysticerci. In this case, dense concentrations of calcareous corpuscles were present in the neck and aggregates were also present adjoining the inner surface of the capsule. Little or no amorphous calcification was seen.

The histopathology of calcified cysts is barely mentioned in the literature and to our knowledge no systematic histopathological study exists. Descriptions of the few pictured and/or mentioned calcified cysts, mostly in older texts, are of thin-walled cysts with little inflammation in the wall17–20; the interior is composed of amorphous calcified debris some with cholesterol clefts. There is variable but usually little recognizable cestode-specific tissue. The lack of inflammation in the older descriptions contrasts with the significant presence of inflammation in the calcifications associated with perilesional edema. Although there are only a few pathological descriptions of calcifications, thus far the findings suggest there are at least two types of calcifications, those that consist of amorphous calcifications and little accompanying inflammation and those consisting of degenerated but still recognizable cysts accompanied by an intense inflammatory response. Whether the lesions associated with perilesional edema are younger and not yet fully evolved into the calcifications described in the older literature is not known. There are no clinical correlates for the described calcifications in the older literature, presumably they were obtained at autopsy and no pertinent history exists. It is highly unlikely that these calcifications were associated with seizure episodes.

Understanding the pathophysiology of seizures associated with calcified cysts is important to devise better prevention, treatment, and prognostic strategies besides the usual anti-seizure medications. Because perilesional edema lesions appear to be inflammatory in character, the potential use of immunosuppressive or anti-inflammatory medications, not just antiepileptic drugs alone, may warrant consideration to prevent or treat intractable recurring episodes in such patients.