Photograph showing the worm as it emerged through the skin on the top of the foot.

Photograph of the intact specimen removed from one patient showing overall size and shape. Anterior end is to the left. Scale bar = 2 mm.

Cross section of the worm in region of intestine, showing the nature of the body wall, including thick cuticle, thin hypodermis, and strong musculature; and the prominent intestine composed of many tall columnar cells with prominent nuclei lying toward the base. Scale bar = 100 μm. 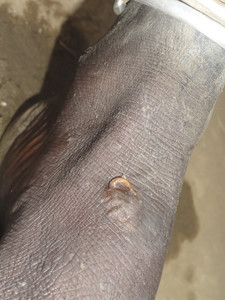 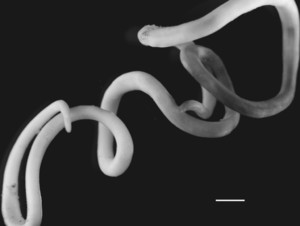 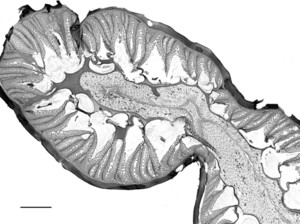 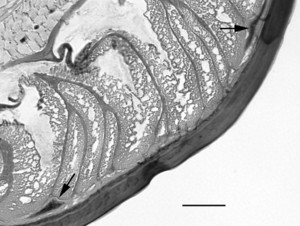 Cutaneous Emergence of Eustrongylides in Two Persons from South Sudan

Two large, living worms were collected as they emerged from the lower limb of each of two persons in South Sudan. The worms were observed by staff of the South Sudan Guinea Worm Eradication Program during surveillance activities in communities at-risk for cases of Guinea worm disease (dracunculiasis). The worms measured 7 and 8 cm in length and were identified as fourth-stage larvae of Eustrongylides. This is the first report of such worms emerging from the skin; all five previous reports of human infection involved surgical removal of worms from the peritoneal cavity.

At this stage of eradication, it becomes crucial to ensure that each case is detected promptly and confirmed so that transmission of the infection is prevented, and that worm specimens are collected and preserved, to confirm that all submitted specimens are Dracunculus medinensis. The Centers For Disease Control and Prevention (CDC) serves as the World Health Organization Collaborating Center for Dracunculiasis Eradication, and provides technical assistance to partners and all country eradication programs, but especially those where endemic transmission persists or which have recently interrupted transmission but not yet been certified as free of Guinea worm disease by the World Health Organization. Submitted specimens can be examined microscopically and at the molecular level to facilitate the diagnosis. Over the past 14 years, 189 samples have been submitted to CDC for evaluation, and 100 (53%) of these have been determined to be D. medinensis. The most common non–Guinea worm samples submitted have been female Onchocerca volvulus.1,2 Over the same 14-year period, 31 non–Guinea worm, but other parasitic worms were submitted to the reference lab, and 20 (65%) of these were determined to be O. volvulus.

In April 2013, two patients, each with a single worm emerging from the skin (Figure 1), were detected and investigated by the South Sudan Guinea Worm Eradication Program (SSGWEP), and the emergent worm was submitted to CDC for identification. At the time of emergence, the SSGWEP did not believe these to be Guinea worm, and upon receipt of the specimens, it was apparent that the two worms were not female Guinea worms or O. volvulus. These specimens were given a complete work-up following standard procedures to more accurately identify them.

The patients (women 23 and 24 years of age) resided in two separate villages in the Payam District of Jie, Kapoeta East County, Eastern Equatoria State, South Sudan. In both instances, the patients were seen by SSGWEP staff between one and three days of the beginning of emergence of the worm, and both worms were extracted by SSGWEP staff, placed into alcohol, and sent to Atlanta.

Both specimens were robust worms, red-brown in color, and measured approximately 7 and 8.5 cm long, respectively (Figure 2) and were approximately 0.8 mm in maximum diameter.; one worm was intact and the other was complete but broken in two pieces. The worms tapered slightly to the blunt extremities. Microscopic examination of the specimens after clearing in lactophenol showed two circles of prominent cephalic papillae, distinctly transverse striations of the cuticle, and a long glandular esophagus. Both specimens were female; the reproductive system consisted of a single tube and the anus and vulva opened terminally on the posterior extremity. These morphologic features are consistent with members of the genus Eustrongylides.

Several short pieces of worm were cut from the broken specimen and submitted for histologic sectioning to evaluate the microanatomy of the worm. Although the worm had dried and become distorted while emerging before being placed in alcohol, various morphologic aspects could still be ascertained in hematoxylin and eosin–stained sections (Figures 3 and 4). The cuticle was thick and multilayered and the hypodermis was thin and inconspicuous, even in the region of the lateral and dorso-ventral chords. However, hypodermal nuclei were present in the interchordal areas. The muscle cells were well developed and were polymyarian and coelomyarian; the individual cells were distinctive and had a prominent contractile portion but had a reduced cytoplasmic portion. In sections of the anterior end, a large glandular esophagus filled the body cavity, and was distinctly divided into dorsal and two subventral regions. In more posterior regions, the intestine was made up of many tall, slender, columnar cells and had individual nuclei lying near the base of the cell. There was no evidence in the sections of a reproductive tube. These features, characteristic of members of the genus Eustrongylides, further confirmed the identification.

The family Dioctophymatidae consists of three distinct genera, and two of them (Eustrongylides and Hystrichis) are found in large tumors in the stomach wall of piscivorous birds (fish-eating birds), and one species (Dioctophyma renale) is found in the kidneys of mainly mustelids and canids. They share a common life cycle that involves eggs being shed into an aquatic or moist environment where they undergo development and contain a first-stage larva.3 Fully embyonated eggs are ingested by terrestrial or aquatic oligochaetes, where the eggs hatch and first-stage larvae invade the tissues of the oligochaete and develop into third-stage larvae, which may be infective to the definitive host. However, paratenic hosts play an important role of transmission of dioctophymids, and hosts such as fish and frogs are commonly infected, and lead to infection when eaten by the definitive bird or mammal host. In the genus Eustrongylides, precocious development to the fourth stage takes place in fish hosts before the parasites are infective to the bird definitive host.

The dioctophymatids share a number of morphologic features in common. Hystrichis can be easily distinguished based on the fact that it has a dilated cephalic end and the anterior end of the worm has numerous, regularly arranged spines, both features that were absent in the specimens in the present cases. Dioctophyma and Eustrongylides are much more similar morphologically but can be distinguished in that the vulva opens at the anterior end in the region of the esophagus in Dioctophyma and terminally near the anus in Eustrongylides.3,4 The terminal placement of the vulva in the present worms facilitated the identification as Eustrongylides, as did the differences in internal morphology observed in the sections of worm, notably the characteristic muscle cells and the nature of the cells comprising the intestine.5

Humans are not normal hosts for Dioctophyma or Eustrongylides, but have on occasion become infected with one or the other. There are more than a dozen authentic cases (possibly more than two dozen) of human infection with adult Dioctophyma inhabiting the kidney or retroperitoneum and three reports of immature worms in subcutaneous nodules.6–8 There have been five reported cases of human infection with larval Eustrongylides, all developing severe abdominal pain within 24 hours of eating either bait minnows, or, in one case, fresh fish used to prepare sushi and sashimi.9–13 In all cases, large worms were recovered surgically from the peritoneal cavity.

More than 20 species of Eustrongylides have been described, either as adults from piscivorous birds or as larvae from cold-blooded vertebrates, such as fish, reptiles, and amphibian. The validity of many of these species is questionable, and in a review of the genus, only three were considered to be valid.14 It is not possible from the material available to assign a species identification to the specimens in the present cases.

This is the first report in humans of Eustrongylides outside the peritoneal cavity, and of the emergence of a dioctophymatid worm from the skin. The three reports of larval Dioctophyma outside the peritoneal cavity were all in subcutaneous nodules. Why the worms in the present cases emerged rather than becoming encased in a nodule is unknown, but serves to highlight that such unusual zoonotic infections can behave in bizarre manner. We presume that the patients became infected through the ingestion of inadequately cooked food, probably a fish of some sort that harbored third or fourth-stage larval worms.

It is not possible to say at which stage or at what size these worms would have been when ingested, nor how much growth occurred between being ingested and the time of emergence. Regardless, the larvae penetrated through the stomach or upper intestine, and then migrated through the peritoneal cavity and on down the leg to emerge on the feet. In none of the previous human cases did the worms migrate out of the peritoneal cavity, but those worms were relatively large at the time of ingestion, which may have hindered their movement, and which may also argue that the worms in the present cases were younger and consequently smaller larvae when ingested. Because the adult worms localize around the stomach in their normal bird host, it is not clear what led to their migration to the extremities in the present cases.