Photographs of samples incubated using body temperature (example from the inner arm). (A) Sample tray attached to the inner upper arm. To incubate using body temperature, 5-well sample trays were attached to body parts that were relatively less influenced by outside temperature changes. Seven locations were investigated: abdomen, back of the neck, thigh, upper chest, outer upper arms, inner upper arms, and inner lower arms. To attach the sample wells to the body, a large-sized patch was first attached to the body surface, the 5-well sample strip was then placed on the patch, and this was covered with a small-sized patch (width 58 mm, depth 12 mm, and height 5 mm) to fix the samples in place. The samples remained attached to the body at all times until the color changed. (B) Sample bubbles after incubation on the inner upper arm, detached. 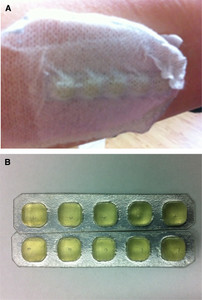 Detection of Coliforms in Drinking Water Using Skin Patches: A Rapid, Reliable Method that Does Not Require an External Energy Source

The detection of coliforms requires incubation in a laboratory, generally powered using electricity. In many parts of the developing world, however, external energy sources such as electricity are not readily available. To develop a fast, reliable method for detecting coliforms in water without an external energy source, we assessed the efficacy of six test kits for the identification of coliforms in water samples. To assess the possibility of using body temperature as the sole source of heat for incubation, bacterial samples were then mixed with the enzymatic test kit reagent and attached to the human body surface using a patch system. The patches were attached to the bodies of volunteers for 24 hours and the practicality and accuracy of the patches were assessed. Coliforms were detected within 24 hours in all patches. This innovation will facilitate the testing of water quality by researchers and by economically disadvantaged people without electricity.