Variation of confidence limits (CLs) around the odds ratio (OR) with number of subjects with rare (thymectomy for thymoma) and more common systemic lupus erythematosus (SLE) potential risk factors. 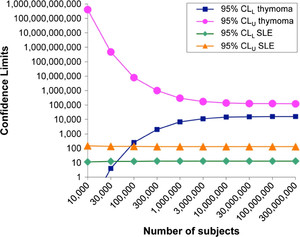 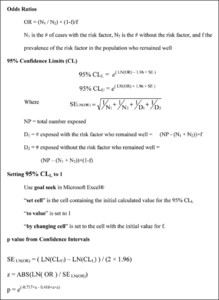 Before 2001, the live yellow fever virus vaccine was considered the world's safest live virus vaccine.1 In that year reports started to appear of rare multisystemic, frequently fatal, reactions that are called yellow fever vaccine-associated viscerotropic disease (YEL-AVD) (for review see Reference 2). On the basis of four of the then known 23 cases, the first risk group for YEL-AVD identified was individuals thymectomized because of thymoma.3 A second risk group, identified using age—but not the combination of age-gender-specific denominator data, consists of people ≥ 60 years of age.4,5 Subsequently, it was recognized that the elderly with YEL-AVD were predominantly males.2 Another risk group is women in their prime child-bearing years.6 Other suspected risk groups include infants and children < 12 years of age, women between 39 and 49 years of age with systemic lupus erythematosus (SLE), and patients with Addison's disease or other autoimmune disorders2,7 (Seligman SJ, unpublished data). This study was initiated to assist in the documentation of other risk groups.

Odds ratios (ORs) are frequently used to identify risk groups, and to quantify the magnitude of the risk. Their calculation typically requires knowledge of the numbers of subjects who had an outcome and had or did not have the predisposing factor (numerator data) and the numbers of subjects in both categories who remained unaffected (denominator data). Consequently, if denominator data are not available, ORs cannot be calculated by the traditional method. The current report illustrates how estimates of the fraction of the exposed population with the suspected risk factor who remain well can be used instead to calculate the OR and confidence interval (CI), how the effect of uncertainty in the estimate of that fraction can be evaluated, and how P values can be calculated using the CI.

Tom Monath supplied an Excel file originally prepared by the Centers for Disease Control and Prevention (CDC) that contained data on 65 cases suspected of having YEL-AVD. The cases came from endemic regions in South America and from prospective travelers to yellow-fever prone areas in South America and Africa. No cases originated in Africa. Three of the cases in which the age and gender of the vaccinee were not known were excluded and two additional cases in prospective travelers (one from New Zealand8 and one from Peru [abstract presented in a poster by Turpo and others at the ASTMH meetings in Atlanta, GA, Nov. 14, 2012]) that came to our attention were added for a total of 64 cases. The five suspected cases of YEL-AVD listed in a report from Africa were not included because none was substantiated by virological or serological evidence.9 Cases were vaccinated in the years 1973–2011 and ranged in age from 10 months to 79 years. Suspected risk groups were identified by clusters of cases stratified by age, gender, and outcome.

Using Eq. (2) and substituting for D1

Accordingly, assuming that N1 and N2 are known, if the fraction f of the exposed population with the suspected risk factor who remained well can be estimated, the OR can be calculated without knowing the denominators D1 and D2.

Under the “central limit theorem” assumption, the standard error of the natural logarithm of the OR (SELN[OR]) can be approximated by

The 95% confidence limits (CL) around the logarithm of the OR are the logarithms of the OR ± 1.96 times the SELN(OR), and the antilogarithms of these logarithmic limits are the 95% CIs around the OR itself. (The anti-natural-logarithm is simply the exponential function, ex). The values for D1 and D2 depend upon the total number in the population (NP). In most situations, NP >> D1 and NP ≈ D2. Even for very rare risk factors and a sufficiently large exposed population, the CLs approach limiting or “asymptotic” values that depend only on the size of N1 and N2 (Figure 1).

Accordingly, the lower and upper 95% CLs (CLL and CLU, respectively) of the OR are given by

Evaluating variations in the estimate of the prevalence of the risk group.

Because f is not usually known with precision, it is of interest to estimate how much f can vary and still be associated with 95% CIs whose lower limit is > 1. Such calculations are facilitated by using an iterative procedure, such as the “goal seek” feature in Microsoft Excel (Microsoft Corp., Redmond, WA). In the goal seek setup box, the “set cell” is the cell containing the initial calculated value for the 95% CLL, the “to value” is set to 1, and the “by changing cell” is set to the cell with the initial value for f. The first and third of these cell values will change so that it is advisable to have the initial values preserved in other cells in the worksheet. If CLs for the estimate of f are available (none is in the current examples), the new value of f is acceptable if it remains within the original CLs.

Using a numerical approximation for the normal probability distribution, the following method for estimating P values from 95% CLs has been developed10:

The age and gender of patients with YEL-AVD are known in 64 cases. Calculations of OR using Eq. (4) and estimated values of f are shown (Table 1). With the exception of pernicious anemia, all of the suspected risk groups have ORs > 1, varying from 2.8 to 140,000.

N1 = the number of subjects with the risk factor who became ill; N2 = the number of subjects without the risk factor who became ill; OR = odds ratio. Frequency estimates for men ≥ 56 years of age and women between 19 and 34 years of age were obtained using the average from three references assuming equal numbers of male and female vaccinees. The remaining frequencies were those used in previous calculations by Monath (Table 3 in Reference 2). For the risk group, individuals thymectomized as treatment of thymoma, N2 was reduced to 19 because following the report of that association in 2004,3 vaccination of such individuals was no longer recommended. Accordingly, the chance for accrual of additional thymectomized individuals became remote. In addition to the three cases of systemic lupus erythematosus (SLE), the two cases of Addison's disease, and the one case of pernicious anemia, one case each of autoimmune disease and YEL-AVD occurred with ulcerative colitis, myasthenia gravis, the combination of polymyalgia with hypothyroidism, and Crohn's disease (recent analysis raises the possibility that the latter entity may be an innate immune defect of macrophages and not autoimmune11).

The data for suspected risk groups are shown (Table 2). A vaccinated population with a hypothetical size of 3 million was chosen because even with rare frequency of the risk group, estimates of the 95% CLL and CLU closely approach the limiting values for populations over 3 million (Figure 1). The total number of vaccinees after the occurrence of YEL-AVD was recognized is over 500 million1; however, case ascertainment particularly in Africa is frequently uncertain. The assertions that the ORs are > 1 for the suspected risk groups: men ≥ 56 years of age, women 19 to 34 years of age, patients with autoimmune disease, people thymectomized because of thymoma, and SLE (Table 1) are supported by the CLL being appreciably > 1.

The data for pernicious anemia do not support its inclusion as a risk group. However, because the SE approximation is inaccurate for numbers ≤ 4, and N1 = 1 for pernicious anemia, the calculated CLs for that variable are unreliable. Similar concerns also affect the calculations for thymectomy secondary to thymoma and SLE where the N1 values are 4 and 3, respectively.

The calculation results are listed in Table 3. Comparing the f values in Tables 1 with those in Table 3, for men ≥ 56 years of age, the prevalence increases 4.8-fold, in women 19–34 years of age 1.5-fold, in patients with autoimmune disease 2.9-fold, with thymectomy for thymoma the increase is 32,000-fold, and for SLE, 13-fold. In all instances the ORs remain > 1. These results indicate the limits to which the change in prevalence is consistent with a statistically significant result as judged by being associated with 95% CLL values ≥ 1.

Results of the P value calculations are shown (Table 4). Although the precise P values calculated by this method are unreliable for values < 0.0001,11 P values for men ≥ 56 years of age, women between 19 and 34 years of age, people with autoimmune diseases, persons with thymectomy for thymoma, and SLE are all highly significant. The P values for pernicious anemia do not support its inclusion as a risk group.

Given an estimate of the frequency of a risk group in the exposed population who remained well, a frequency usually close to the frequency in the total population, calculations of ORs, CIs, and P values can easily be made (Box 1). Finding the prevalence that would reduce the 95% CLL to 1 illustrates the extent to which the prevalence may be increased with maintenance of a statistically significant result. Risk factor-specific denominator data are not necessary to obtain these estimates. As illustrated in the examples of the rare viscerotropic reactions following yellow fever vaccine, if the prevalence of the risk group in the total population that did not become ill can be estimated, these methods facilitate identification of risk groups when denominator data are not available.

The calculations confirm that people thymectomized because of thymomas, men ≥ 56 years of age, and women between 19 and 34 years of age are at increased risk for developing YEL-AVD and support the inclusion of patients with autoimmune disease and women 39 to 49 with SLE as being in a risk group. The data do not support the inclusion of patients with pernicious anemia in a risk group. Reasons for the susceptibility to YEL-AVD are unclear. Initially it was suspected that the vaccine virus may have regained virulence, but extensive sequencing of virus isolated from cases does not support this hypothesis.1 The current analysis indicates that a variety of autoimmune disease are associated with an increased risk (Tables 1–4). In a 64-year-old man who survived, limited sequencing of a few genes resulted in the identification of polymorphisms in CCR5 and RANTES genes.12 More extensive evaluation of the genomes of additional cases with a variety of risk factors is clearly indicated. As seen for example with live BCG adverse effects,13,14 identification of risk groups is an important guide in determining genetic immune defects. Such identification could lead to the prevention and cure of YEL-AVD resulting in safer administration of the live yellow fever virus vaccine.