Comparison of clinical and biological aspects of tuberculosis and histoplasmosis, French Guiana. Circles indicate no. positive patients/no. tested (%). The scale used proportions to avoid distortion of data. Circles intersections indicate n, which corresponded to the number of patients concerned. Because of missing values, the total for each group is different from the 99 patients with tuberculosis and the 106 patients with histoplasmosis. Anomalous liver test results were defined by an aspartate aminotransferase level > 34 IU/L, an alanine aminotransferase level > 44 IU/L, a γ-glutamyl transferase level > 72 IU/L, or an alkaline phosphatase level > 100 IU/L. Cytopenia was defined by a hemoglobin level < 9 g/dL, a neutrophil count < 2,750 cells/mm3, or a platelet count < 150,000/mm3. Inflammatory markers were defined by a C-reactive protein level > 70 mg/L. 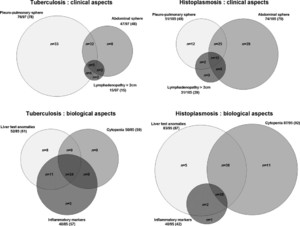 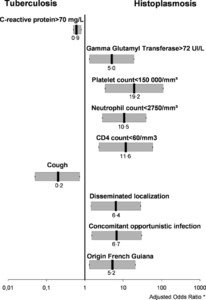 With an acquired immunodeficiency syndrome (AIDS) incidence 10 times higher than the incidence in mainland France, and a prevalence > 1%, French Guiana is the French territory where the human immunodeficiency virus (HIV) epidemic is the most preoccupying.1 Histoplasmosis and tuberculosis are among the top four AIDS-defining illnesses. Disseminated histoplasmosis was the first AIDS-related cause of death in 2005.2,3

Histoplasmosis and tuberculosis during the HIV infection are often seen as disseminated infections. With the aggravation of immunodeficiency, dissemination of the pathogen causes a rapid and fatal evolution in the absence of treatment.4,5 At this stage, invasive diagnostic methods are necessary. Biological confirmation through pathogen identification by culture is long and sometimes difficult in cases of profound immunosuppression. Rapid and sensitive antigenic detection techniques are not available in most countries.6

Although studies before the HIV era reported a high prevalence of positive histoplasmin test results there have been few publications on this disease in the Caribbean and the Guianas.3,12,13 In low-resource countries, a number of AIDS cases may die of histoplasmosis mistaken for multidrug-resistant tuberculosis.10,14,15

In French Guiana, because of their high incidence, clinicians generally suspect histoplasmosis and tuberculosis in immunosuppressed patients at admission. Prolonged hospitalizations are often necessary for identification of infecting pathogens by invasive procedures. Mycologic and mycobacteriologic screening are systematically performed. Frequently, a presumptive treatment is initiated before culture results are obtained.16

In this context, a comparative study between tuberculosis and histoplasmosis seems straightforward and might be useful. A systematic review of the literature showed that since 1906, studies on the differential diagnosis of tuberculosis and histoplasmosis have not been conducted.17 Although it is assumed that these two diseases are similar, there is little basis for making this conclusion.

The objective of this study was to compare tuberculosis and histoplasmosis in HIV-infected patients to identify epidemiologic, clinical, biologic, and radiologic differences. A secondary objective was to help therapeutic decisions in life-threatening situations.

This retrospective study was conducted at Cayenne Hospital (Cayenne, French Guiana) during January 1997–December 2008. The study population consisted of HIV-infected patients from the French Hospital Database on HIV, a national cohort for which data have been routinely collected since 1992. This database was approved by the Commission Nationale Informatique et Libertés. The study database and protocol were approved by the Institut National de la Santé et de la Recherche Médicale (INSERM (IRB00000388, FWA00005831). Patients provided written informed consent.

Data were collected on a standardized form and included sociodemographic, clinical, biologic, radiologic, and therapeutic information. Clinical evaluation of the patients' general condition upon admission used the Eastern Cooperative Oncology Group score,18 also known as the World Health Organization performance status score. These data were then entered in an anonymized database.

To select variables for the multivariate model, bivariate logistic regression models used categorical independent variables. In the absence of similar studies in the literature, the cut-off value was the median or mean according to the distribution of continuous variables. For some variables, the reference laboratory threshold was used because it was clinically meaningful (i.e., for platelet counts, the median was 222,000/mm3, but categorization used a threshold < 150,000/mm3). For ferritinemia, some ferritin concentrations were > 1,000 μg/L. To avoid confusion, the variable was categorized as > or < 1,000 μg/L.

Age, sex, and variables that had a P < 0.2 were used in the multivariate model. Variables with a P < 0.2 (systolic and diastolic blood pressure, chest computed tomography scan, abdominal ultrasonography, albuminemia, serum iron level, ferritinemia, triglyceridemia, and fibrinogenemia) were not included in this model because of a large number of missing values and to avoid a large proportion of persons who were dropped from the final model. The saturated multivariate model included 156 patients.

Dummy variables were created for the geographic origin and the residence location with Haiti and the Cayenne urban community as the respective referent population coded as 1.

Threshold of 18 years corresponds to the median.

Chest radiographs showed an interstitial syndrome that was comparable in both groups. The proportion of patients with deep lymphadenopathy and/or ascitis was also similar in both groups. Chest radiographs also showed that an alveolar syndrome and/or pleural effusions and/or pulmonary infiltrates were greater in persons with tuberculosis than in those with histoplasmosis. Abdominal ultrasonography showed that hepatomegaly and/or splenomegaly were greater in persons with histoplasmosis than in those with tuberculosis.

Median levels of lactate dehydrogenase (LDH) were increased in both groups (328 IU/L, IQR = 231–491 for persons with tuberculosis and 446 IU/L, IQR = 316–1,216 for those with histoplasmosis). Renal failure or hypoalbuminemia was observed in both groups.

A subgroup of patients who did not have concomitant opportunistic infections was analyzed separately to verify that the results were not affected by concurrent opportunistic infections. There were 91 cases of tuberculosis and 80 cases of histoplasmosis. Replication of the above analyses in this subgroup showed identical differences, suggesting that concomitant infections did not confound the above results.

Forward and backward stepwise logistic regression converged on identical models. Results from multivariate analysis are shown in Table 2 and significant results according to the forward model are shown in Figure 2.

A dummy variable was created for the geographic origin with Haiti as the respective referent population coded as 1.

Most patients did not take any treatment (antiretroviral or primary prophylaxis) at the time of diagnosis. It was therefore not surprising to observe concurrent opportunistic infections, notably in patients with histoplasmosis.

The initial clinical presentation in both groups was dominated by prolonged fever in a context of poor general condition, notably weight loss. However, this condition was more pronounced in persons with histoplasmosis.

Ferritin concentration has also been described as an indicator for the diagnosis of severe disseminated histoplasmosis.25 However, because of a large number of missing values, this variable was not selected for multivariate analysis.

This study had limitations. Data were collected retrospectively, which might have led to selection biases. Missing values for certain variables that were not included in the regression model may not have been missing randomly and were most likely influenced by clinical experience of the physicians. Histoplasmosis and tuberculosis represent only 50% of AIDS-defining illnesses in French Guiana, a finding that does not enable definition of decisional algorithms adapted to clinical situations.

Despite its limitations, this study is the first to compare tuberculosis and histoplasmosis among HIV-positive patients. A study reported excessive mortality in patients receiving antituberculosis treatment because of lack of knowledge about histoplasmosis or diagnostic difficulties.10 Thus, not knowing the differences between tuberculosis and histoplasmosis is a serious concern because it should strongly encourage clinicians in disease-endemic areas to conduct invasive diagnostic procedures or initiate presumptive treatment, notably in the presence of severity criteria.16,26

Nevertheless, in addition to a high clinical suspicion index, there is a need for an affordable, specific, sensitive, user friendly, robust, rapid, equipment free, and deliverable diagnostic tool to help clinicians in low-resource countries diagnose histoplasmosis.

The question initiating this study was whether tuberculosis and histoplasmosis in HIV-infected patients are clinically similar. The answer to this question is no. Although tuberculosis and histoplasmosis have similarities, a certain number of particularities described in this report can aid therapeutic decisions by clinicians, notably when a short-term prognosis is at risk.