Selection of reports included in the analysis. 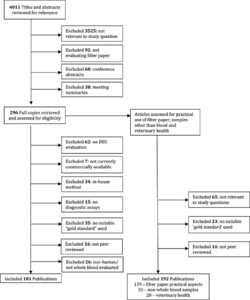 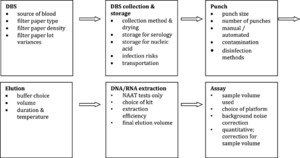 Tropical infectious diseases diagnosis and surveillance are often hampered by difficulties of sample collection and transportation. Filter paper potentially provides a useful medium to help overcome such problems. We reviewed the literature on the use of filter paper, focusing on the evaluation of nucleic acid and serological assays for diagnosis of infectious diseases using dried blood spots (DBS) compared with recognized gold standards. We reviewed 296 eligible studies and included 101 studies evaluating DBS and 192 studies on other aspects of filter paper use. We also discuss the use of filter paper with other body fluids and for tropical veterinary medicine. In general, DBS perform with sensitivities and specificities similar or only slightly inferior to gold standard sample types. However, important problems were revealed with the uncritical use of DBS, inappropriate statistical analysis, and lack of standardized methodology. DBS have great potential to empower healthcare workers by making laboratory-based diagnostic tests more readily accessible, but additional and more rigorous research is needed.