Yearly distribution of the moving average of the estimated number of total attending patients, intestinal amebiasis (IA), and shigellosis. 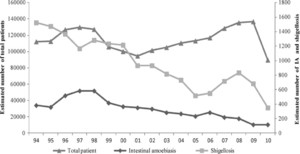 Established in 1962, the Dhaka Hospital of icddr,b, located in Dhaka, the capital city of Bangladesh provided care and treatment to people with diarrheal diseases. The majority of the patients came from urban and peri-urban Dhaka.

During the last 20 years, over 100,000 diarrheal patients annually receive free care and treatment from this hospital. A Diarrheal Disease Surveillance System (DDSS) was established in 1979 that systematically samples patients—4% of all patients from 1979 through 1995, followed by 2% of all the patients since 1996. The DDSS currently collects information on clinical, epidemiological, and demographic characteristics of feeding practices, particularly of infants and young children and drug and fluid therapy use at home of every 50th patient, regardless of age, sex, disease severity, or socioeconomic status through an administered structured questionnaire. A trained research assistant interviews either the patients themselves or caregivers in the case of young children. Extensive microbiological assessments of fecal samples (culture, enzyme-linked immunosorbent assay [ELISA], and microscopy) are routinely performed to identify diarrheal pathogens. This activity provides valuable information to hospital clinicians in guiding their decision-making processes and enables the detection of emerging new pathogens. It also allows for the early identification of outbreaks and therefore alerting host governments to take appropriate preventive and control measures. The system also monitors changes in patient characteristics and antimicrobial susceptibility of common bacterial pathogens. For this analysis, relevant information was collected from the electronic database of the DDSS for the period 1993–2011.

For this analysis, we studied patients of either sex, segregated into two age stratum: 0 to 14 years of age and 15 years of age and above, who attended the hospital between 1993 and 2011 inclusive.

Diarrhea was defined as passage of abnormally loose or watery stools three times or more within the last 24 hours. Intestinal amebiasis was defined as individuals having a positive stool microscopy for vegetative EH10 (It was difficult to detect Entamoeba dispar in stool microscopy; however, in most of the cases, this parasite is nonpathogenic and remains asymptomatic,11 and we included all the diarrhea patients in the analysis); and shigellosis was defined as stool culture yielding growth of any member of Shigella spp. Individuals with no formal schooling were considered as illiterate. Pneumonia was defined as presence of adventitious sound (rhonchi or crepitation) in the lungs.12

Data analyses were done using the Statistical Package for Social Sciences (SPSS) Windows (Version 15.2) and Epi Info (version 6.0, USD, Stone Mountain, GA). For categorical variables, differences in the proportions were compared by the χ2 test and a probability of < 0.05 was considered as statistically significant. Strength of association was determined by estimating the odds ratio (OR) and its 95% confidence interval (CI). Finally, logistic regression analyses were performed, after adjusting for the co-variantes that were significantly associated with univariate analysis.

This study was approved by the RRC (Research Review Committee) and ERC (Ethical Review Committee) of icddr,b. All individuals were enrolled and their stool specimens were collected for microbiological assessment once they gave consent.

Variables that were found to be significant in univeriate analysis were included in the multivariate model.

On the other hand, patients 15 years of age and older, a higher proportion of patients in this age group with intestinal amebiasis and living in the slum presented with watery stool with dehydrating diarrhea and also commonly visited the hospital within 24 hours of diarrhea onset (Table 2). However, at least 71% patients with EH and Shigella had abdominal pain. Stool microscopic examination was found similar in the 15 years and above age group (Table 2).

Variables that were found to be significant in univeriate analysis were included in the multivariate model.

In logistic regression analysis of data of patients younger than 15 years, after controlling for factors that were significantly associated in an univariate analyses, living in slum areas was found to be significantly associated with intestinal amebiasis; however, alkaline stool pH and presence of any number of RBC and fecal leukocytes in stool microscopy were found to be protective for IA (Table 1). Conversely, living in slum areas and watery stool were the predictors for intestinal amebiasis; whereas, use of antimicrobials before attending the hospital, presence of RBC, leukocytes in stool were protective for IA for patients 15 years of age or older (Table 2).

In Bangladesh, mothers are usually the primary caretakers of children. Lack of maternal knowledge and practices related to the importance of breast feeding and appropriate weaning practices and optimal hygienic behaviors often interfere with the proper care of children.13–15 On the other hand, fathers as the household heads are the primary decision makers for the family, particularly in health care-seeking behaviors and use of health care facilities. In univariate analysis, we noted the associations between lack of formal schooling of both parents with intestinal amebiasis. Living in conditions lacking safe water and adequate sanitation facilities, contaminated environment, and overcrowding also facilitate fecal-oral transmission of the diarrheal pathogens.16 We observed an independent association of intestinal amebiasis with a lack of formal schooling of mothers, slum dwelling, and poor socioeconomic background of the patients.

In this study, patients with intestinal amebiasis often presented with watery stool associated with dehydrating diarrhea.3,17 Patients attending with shigellosis or bacillary dysentery (bloody-mucoid stools) presented less often with clinical dehydration because they lose smaller quantities and frequency of stools.18 Although the frequency of abdominal pain was greater among patients with shigellosis who were 15 years of age or older, the frequency was almost the same among younger patients for both intestinal amebiasis and shigellosis.

Early cessation of breast feeding in infants has clear ramifications on health, nutrition, and disease morbidities, including diarrheal disease. Although the proportion of early discontinuation of breast feeding was higher among children with intestinal amebiasis, the values were not statistically significant because of inadequate sample size. Conversely, the proportion of children not receiving a vitamin A capsule was higher among both the groups. Children who did not receive vitamin A were very likely to have a lower serum retinol level along with reduced liver store of the vitamin A, making them immunocompromised,19 which is a greater problem among malnourished children.

A lesser proportion of patients with intestinal amebiasis had a history of taking antimicrobials at home than those with shigellosis in both age groups of patients. However, the proportion of shorter duration of diarrhea before a hospital visit (< 24 hours) was more observed among ameabiasis patients. Possible explanations of this may be a result of early reporting to the hospital (within 24 hours) because of dehydration and delayed manifestation of the bloody mucoid stool for intestinal amebiasis. Distribution of malnourished children and adults were similar in patients with intestinal amebiasis and shigellosis. At least 30% of the children were wasted; however, cases of stunting and underweight were 50% and 55%, respectively. Moreover, malnutrition was significantly associated with both the morbidities.

The presence of RBC and leukocytes/hpf (11 to > 50) in stools signifies an inflammatory process caused by invasive pathogens or may be the result of idiopathic ulcerative colitis, which is associated with loss of mucosal integrity and inflammatory response in the gut.20,21 Trophozoites of EH produce two types (nodular and irregular) of nonspecific lesions,22 whereas Shigella causes an invasive colitis involving the epithelium and lamina propria through a complex and intimate mechanism mediated by both microbial and host protein.23 In direct stool microscopy, the presence of RBC, leukocytes/hpf (11 to > 50), and macrophage were less frequently observed among cases with intestinal amebiasis.24 Host response disparities including impairment of cell-mediated immunity and under-nutrition, variations in the disease severity, repeated enteric infections, and mixed infections may influence the number of fecal leukocytes in the stools.25 The prevalence of shigellosis is much higher compared with intestinal amebiasis in Bangladesh and presence of any number of RBCs and ≥ 20 fecal leukocytes and presence of macrophages in stool microscopy is associated with shigellosis.26 The EH secretes proteinase, which dissolves host tissues, kills host cells on contact, and engulfs RBCs1 and causes lysis of leukocytes. Therefore, their presence and numbers in stool are less than those in shigellosis24; these factors may explain our observations. The number of fecal leukocytes depends on the anatomic site of involvement and the extent of the inflammatory process rather than the etiology.27

Hospital-based data, however, might not adequately represent the population at large with a possible bias toward patients with intestinal amebiasis who seek care less often from hospital facilities. On the other hand, we considered only vegetative EH in stool microscopic examination not by ELISA or PCR, excluding co-infection such as V. cholerae and rotavirus, but not enterotoxigenic Escherichia coli (ETEC) because of the unavailability of data; however, prevalence of ETEC as co-infection was very low (with EH [< 1%] and Shigella [< 1%]) (Faruque AS, personal communication), which might not influence our analysis; and also did not exclude the non-pathogenic and non-hematophagus Entamoeba dispar. However, our strengths were that we followed an unbiased systematic sampling regardless of age, sex, nutrition status, disease severity, or socioeconomic context and used a large data set for this analysis. High-quality laboratory performance of the Clinical Microbiology Laboratory of icddr,b for detecting EH by stool microscopy was our strength. This is the only laboratory that has international accreditation (ISO 15189:2007) in Bangladesh.

Although the proportion of intestinal amebiasis has decreased,29 it still continues to be a major health problem because of the morbidities and nutritional and economic consequences. Improvement of livelihoods with proper knowledge might interrupt the transmission and therefore reduce the burden of disease. However, the distinct clinical and cost-effective stool microscopic features of IA from those with shigellosis might help to initiate appropriate treatment. At the same time, emphasis needs to be placed on low-cost sanitation and hygiene practices. In addition, an increase in the rational use of antimicrobials is urgently required for taking appropriate measures to control these continued public health challenges among the poorer slum-dwelling population.